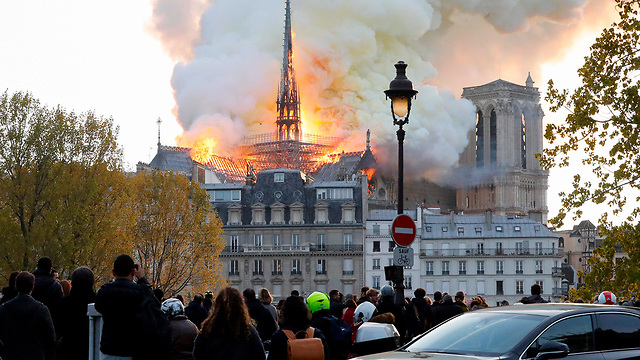 Notre-Dame Cathedral went up in flames, spire collapses Monday in a roaring blaze devastating the Parisian landmark, one of France's most visited places.

Notre-Dame Cathedral went up in flames on Monday in a roaring blaze that devastated the Parisian landmark, one of France's most visited places.

Flames that began in the early evening burst through the roof of the centuries-old cathedral and engulfed the spire, which collapsed, quickly followed by the entire roof.

Collapse of cathedral spire
A huge plume of smoke wafted across the city and ash fell over a large area. Parisians watched on, many of them lost for words. "Everything is collapsing," a police officer near the scene said as the entire roof of the cathedral continued to burn.

Firefighters cleared the area around the cathedral, which marks the very center of Paris. Buildings around were evacuated. President Emmanuel Macron cancelled an address to the nation that he had been due to give later on Monday evening. A presidential official said Macron was to go to the scene of the blaze. "Like all our compatriots, I am sad this evening to see this part of all of us burn," Macron tweeted.

"A terrible fire is under way at Notre-Dame Cathedral in Paris," Mayor Anne Hidalgo said on Twitter. France 2 television reported that police were treating the incident as an accident. The cathedral, which dates back to the 12th century, features in Victor Hugo's classic novel "The Hunchback of Notre-Dame". It attracts millions of tourists every year.

Notre-Dame was in the midst of renovations, with some sections under scaffolding and bronze statues were removed last week for works.

The first stone of the Notre-Dame de Paris ("Our Lady of Paris") cathedral was laid in 1163 in the reign of Louis VII, as the medieval city of Paris was growing in population and importance, both as a political and economic centre of the kingdom of France.

Construction would continue for much of the next century, with major restoration and additions made in the 17th and 18th century. The stonework and stained glass of the edifice recreate images and lessons from the Bible.

Dominating the structure are its two 13th century bell towers. The so-called "bourdon", the largest bell, goes by the name of "Emmanuel".

The 387 steps up to the towers take visitors past the gallery of chimeras, mythical creatures typically composed of more than one animal. The most famous of these, the "Stryge" gargoyle sits atop the cathedral watching Paris with its head resting in its hands.

Victor Hugo used the cathedral as a setting for his 1831 novel, "The Hunchback of Notre-Dame". Quasimodo, the main character, is feared by Parisians because of his deformity but finds sanctuary in the cathedral and is employed as a bell-ringer. Quasimodo has been portrayed by Hollywood actors including Charles Laughton and also in an animated Disney adaptation.