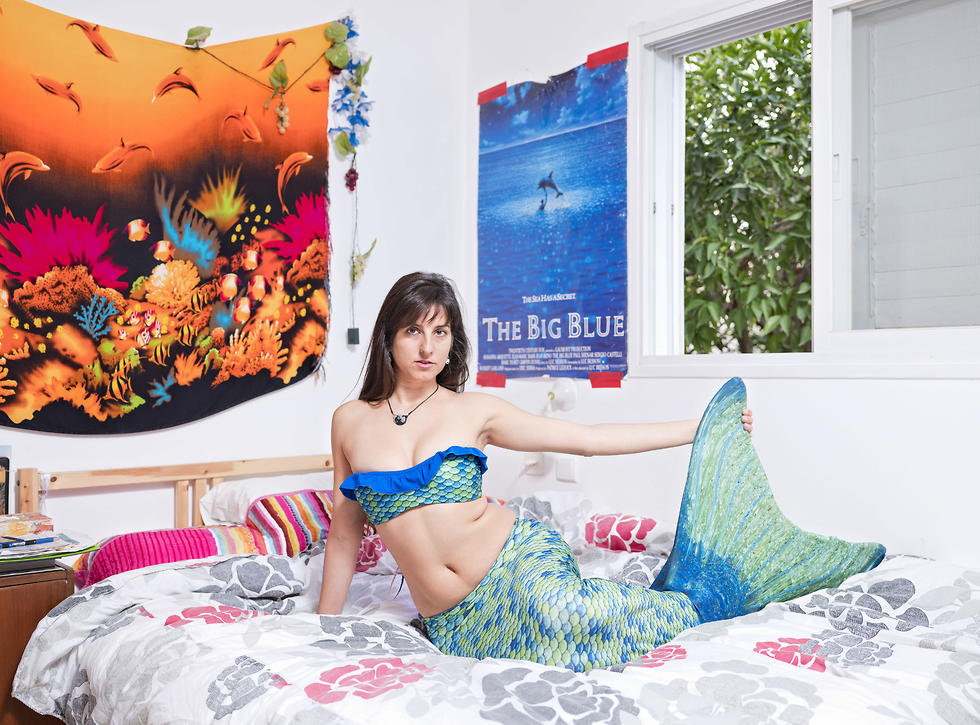 A dive into Israel's mermaid community

Two mermaid fans started an unlikely social scene that has now grown on Facebook to nearly 1,000 people; welcome to the Israeli pocket of a worldwide community, whose members feel 'part of something big'

Last year, Shir Katzenell made a drastic life change, leaving a prestigious job in the Israeli army to pursue a childhood dream: becoming a mermaid.

Ever since getting hooked on Disney's "The Little Mermaid" as a kid, Katzenell confided, she has longed to turn into one. While her friends moved on, Katzenell's enchantment with mermaids endured. She fantasized about swimming underwater alongside fish in a 10-pound tail and sequined bikini. Then she actually gave it a try.

Ligal Shternhell, a member of the Israeli Mermaid Community, poses for a portrait as she wears a mermaid tail, Kibbutz Ein Carmel

As it turns out, she's not the only one.

Together with a friend and fellow mermaid-fan, Michelle Koretsky, she started an unlikely social scene: a group of aspiring mermaids in Israel, which has grown on Facebook to nearly 1,000 members. It's the Israeli pocket of a worldwide community that she claims is gaining prominence.

Gal Amnony, Ramat Gan
"It was a crazy revelation," said Katzenell. "I realized I was part of something big."

Ommer Globerman, Ashkelon
Now, as a 34-year-old "full-time mermaid," she sells brightly-colored tails, some with dizzying $800 price tags, and teaches people the skill of swimming in them. The tail-clad group convenes regularly to romp in public pools across the country and participate in demonstrations to raise awareness about ocean preservation.

Yuval Avrami, Jerusalem
"Some come because they're just interested or feel a special connection to the water. Others because they really dream of becoming mermaids," Katzenell said. "They've often been embarrassed, told they were weird or crazy. But here they can find people who understand them."

On a recent night at a Tel Aviv pool, dozens of mermaid enthusiasts slipped on their shimmering skin. Huddled on deck, they chatted about the latest developments in mermaid culture, including "The Little Mermaid" remake release date, silicone tail costs and relevant book recommendations. They glided through the water and splashed around, their glittery tails slapping against the surface.

Adi Kazav, left, and Lied Adi Hagbi, Netanya
One of the clan's few mer-men, Yuval Avrami, marveled at how his fabric fin flitted in the water, describing it as a "dream come true." He said he learned about the trend through transgender friends and became fascinated by "the transition from one species to another, the ability to inhabit a new, magical identity."

Inbar Ben Yakar, Kiryat Yam
Another member, an aerobics instructor named Udi Frige, said he had been swimming in the sea with his legs pressed together for decades, imitating mermaid choreography from the hit movie "Splash." Frige, 39, compared confessing his mermaid obsession to coming out in the LGBT community. "It's my thing, it's unique, it's who I am," he said. "It requires lots of difficult explanation, especially if people don't know me."

Vered Klein, Ramat Gan
For others, it's just a source of innocent joy. "When I'm flying through the water with my tail, I forget all my worries," said Koretsky, the community co-leader. "For that second, I'm a child again. I'm free."