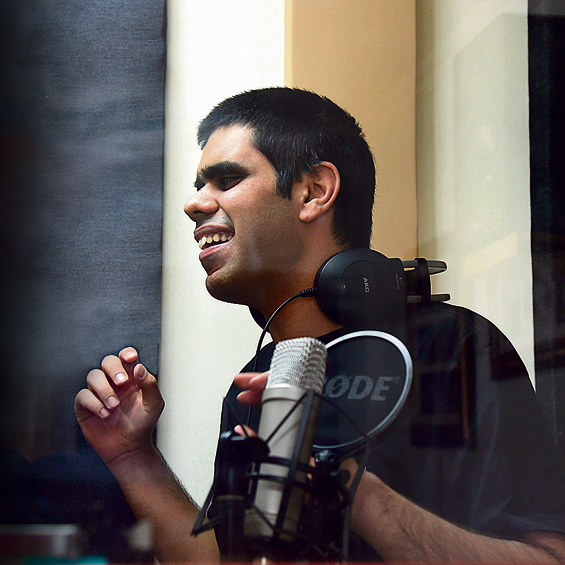 Dancing in the dark

30-year-old Eran Uzan is a DJ and radio station owner who does not let his blindness hold him back; his love for music is equalled by his determination to succeed in his chosen field and be a voice for other Israelis with disabilities

At first glance, it seems that Eran Uzan plays his music with his eyes closed, like any other DJ. He feels the audience, hears their response to his music, but ultimately, he is different.

Uzan can't see his audience - he is blind from birth. When it comes to music, his blindness is no disability; in a way it is even an advantage.

The 30-year-old resident of Ofakim in southern Israel is one of a few blind DJs in Israel. He is very popular among soldiers, performs in private events and along with his mother has an alternative radio station - Radio Sahar  - that is on the air around the clock.

"My sister and I were born blind," says Uzan. "I never felt different from other children. I attended a regular class with fellow pupils who had no physical disabilities. From what I recall from my childhood, I was a professional cassette demolisher from birth. I tore up the cassettes and put them back in the cassette recorder. I just couldn't stand the sound of the cassette recorder.

"Then little by little I understood how a cassette works and I started making my own music. I made remixes by recording from one cassette to the next, copying song verses and pasting them onto other songs. One recorder for playing music and the other for recording the lyrics. Later I went to events and for hours I listened to DJs and learned from them, and that is how I became addicted to this profession."

When he was in 10th grade, Eran's father bought him his first song mixer – he immediately understood that this was his destiny in life.

"I began learning to play the piano at age seven," says Eran and begins to move his microphone to his DJ position. "But I was always more interested in modern music I heard on the radio than with classical music. When in high school I got the mixer that I play on today it was clear to me that this was my future. Since then, I have played in many places. I was the prelude for (rapper) Subliminal's band, and when they came to Ofakim I played with other famous musicians. When high school was over, I dove even deeper into being a DJ and decided to open my own radio station."

Along with the successful musical story, the true story here – is the relationship between Mazal, a mother, and her two children Eran and Sahar – both born blind.

"Since childhood we knew that Eran's blindness wouldn't prevent him from being an innovator in any field he chooses," his mother Mazal says. "He is a normal child who learned in a normal classroom in elementary school in Ofakim and at high school. The principal at the school Eran attended insisted he attend a normal class and in the end, he became an honor roll student. We both studied for our B.A. degree at Sapir College – him and me. Since childhood he always had ambitions and in elementary school, he showed exceptional capabilities, a wonderful child who was always above average."

When do you remember the love story between Eran and the radio beginning?

"Eran first went on the air on high school radio in 10th grade for a radio course he took in school," says Mazal.

"After finishing his studies, he opened his own studio and decided that this is the way he will provide for himself. Eran worked for a local radio station in the center of the country until we decided it was time for something we could call our own, so we opened Radio Sahar," she says.

"Eran is the editor, producer, technician - a one-man show, just him and his mother. This radio station is for us to hear the otherwise silent voices of people with disabilities. There is still not enough awareness of their everyday struggles - they want to be heard, but there is no one to listen."

Eran with his mother Mazal at their studio (Photo: Haim Horenstein)

Is that what you speak about when on the air?

"Not only about that. We speak a bit about politics, world news, but mainly we play music that Eran composed on his own. Our radio station is different from others because it comes with the special insight Eran brings with him."

For a long time Eran had difficulties making his way in music. "I was told to be careful not to get electrocuted by the cables because 'you cannot see where to connect them,` and all kinds of different excuses," he says. "I was never told that it was because I cannot see, but that was their excuse."

Do you think that that our society discriminates against people with disabilities?

"Our society not only discriminates but is also hypocritical."

Where did you encounter this behavior?

"Sometimes I was invited to events and ended up being only a prop on the stage. These are things that I will never agree to do and that is the difference between our radio station and the society outside - here we treat everyone equally."

After all you went through what is your input on life?

"Go with your heart and if you need to rebel then do it, you cannot be afraid about anything and only believe in yourself."