A relative of a victim of the Sri Lanka attacks cries at a hospital in the wake of the blasts (Photo
Photo: AP 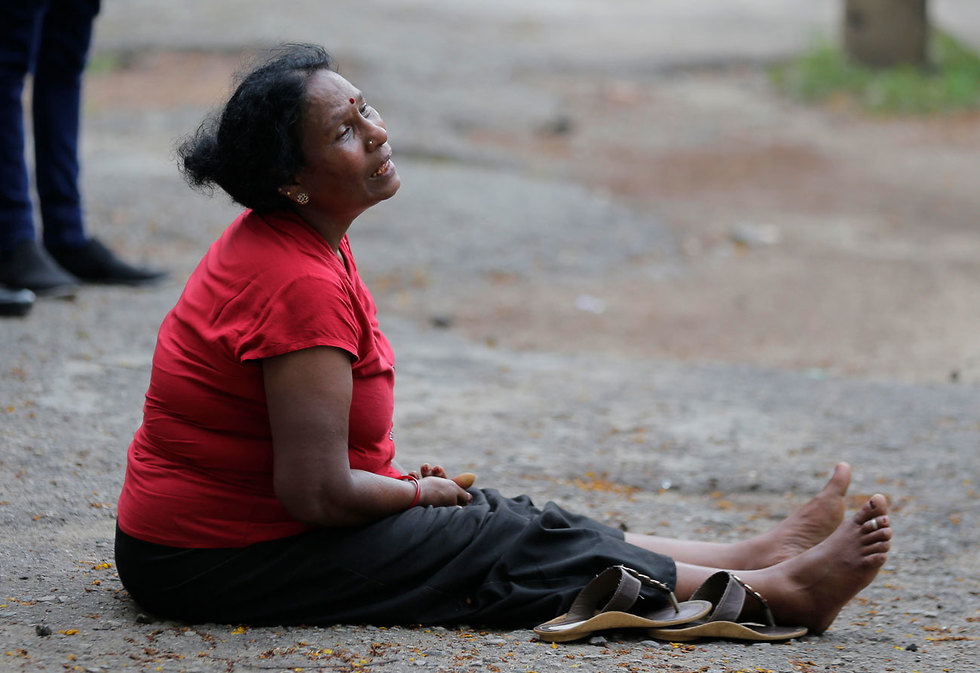 Netanyahu slams 'murderous attacks against innocent people', says Jewish state 'ready to assist at this difficult time'; Pope Francis laments bombings that targeted Christians 'while they were gathered in prayer'

Prime Minister Benjamin Netanyahu joined other world leaders in expressing shock over a series of blasts apparently targeting Christians on Easter Sunday, which killed at least 207 people and wounded more than 600 others. He also offered Israel's assistance to Sri Lanka in the aftermath of the attacks.

"In the name of the citizens of Israel, I express deep shock at the murderous attacks against innocent people in Sri Lanka," Netanyahu said in a tweet in Hebrew. "Israel is ready to assist the authorities in Sri Lanka at this difficult time. The whole world must unite in the struggle against the plague of terrorism."

A relative of a victim of the Sri Lanka attacks cries at a hospital in the wake of the blasts (Photo: AP)

Pope Francis denounced the "cruel violence" of the Easter Sunday slaughter as he celebrated the most joyful moment on the Christian liturgical calendar by lamenting the bloodshed and political violence afflicting many parts of the world.

In a special appeal at the end, Francis lamented the "grave attacks," which occurred just as the Christian faithful were celebrating Easter Mass that marks the resurrection of Christ following his crucifixion.

"I want to express my loving closeness to the Christian community, targeted while they were gathered in prayer, and all the victims of such cruel violence," Francis said. "I entrust to the Lord all those who were tragically killed and pray for the injured and all those who are suffering as a result of this dramatic event."

"World Jewry - in fact all civilized people - denounce this heinous outrage and appeal for zero tolerance of those who use terror to advance their objectives," he said in a statement. "This truly barbarous assault on peaceful worshippers on one of the holiest days in the Christian calendar serves as a painful reminder that the war against terror must be at the top of the international agenda and pursued relentlessly."

The Catholic Church in the Holy Land also condemned the attacks.

"We pray for the soul of the victims and for a quick recovery of the wounded; we ask God to inspire the terrorists to repent for the murders and acts of terror," said the church in a statement from Jerusalem. "We also express our solidarity with all Sri Lankans of all religions and ethnicities."

New Zealand Prime Minister Jacinda Ardern condemned the attacks as "devastating," and referred to the March 15 shootings at two mosques in the New Zealand city of Christchurch in which 50 died.

"New Zealand condemns all acts of terrorism and our resolve has only been strengthened by the attack on our soil," Ardern said. "New Zealand rejects all forms of extremism and stands for freedom of religion and the right to worship safely."

Inside St. Anthony's Shrine in Kochchikade church it was hit by a blast (Photo: AFP)

"The acts of violence against churches and hotels in Sri Lanka are truly appalling, and my deepest sympathies go out to all of those affected at this tragic time," she said.

The head of the European Union's executive Commission, Jean-Claude Juncker, said he learned of the bombings "with horror and sadness."

German President Frank-Walter Steinmeier wrote in a message to his Sri Lankan counterpart that he was "stunned and horrified" by the "cowardly terror attacks." Austrian Chancellor Sebastian Kurz wrote on Twitter that he was "deeply shaken and concerned by (the) devious terrorist attacks."

Russian President Vladimir Putin denounced the attacks as "cruel and cynical." In a telegram of condolences sent to his Sri Lankan counterpart, the Russian leader said Moscow remains a "reliable partner of Sri Lanka in the fight against international terrorism."

Lebanese Prime Minister Saad Hariri called the attacks "blind terrorism" and offered solidarity to the Sri Lankan people. Hariri, whose own father was killed in a Beirut bombing in 2005, asked for mercy for the "innocent victims" and speedy recovery for the wounded.

Families of victims of the Sri Lanka bombings gather at a hospital in Colombo (Photo: AP)


Bahrain, Qatar and the United Arab Emirates all issued statements via their foreign ministries over the attack.

The UAE called upon "the international community to close ranks and uproot the scourge of terrorism in order to ensure international peace and security." Qatar said it wanted to stress its "its firm stance on rejecting violence and terrorism."

Bahrain, meanwhile, said "these acts of terrorism are incompatible with religious principles and human and moral values."

Iran's foreign minister said he was "terribly saddened" by the bombings, writing in a tweet that "terrorism is a global menace with no religion: it must be condemned & confronted globally."

Trump took to Twitter to condemn the "horrible terrorist attacks on churches and hotels that have killed at least 138 million people and badly injured 600 more."

The death toll at the time of the tweet was at least 138 people. He later deleted the tweet and reposted a corrected version.