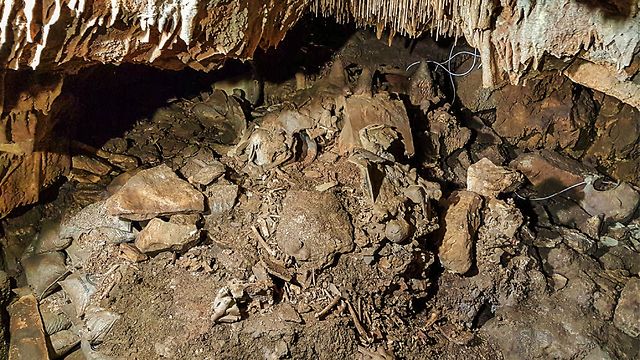 Who do you think you are?

Primeval DNA testing finds genetic matches across the world demonstrating that we were all migrants and are all related; test examines 7 ancient population groups: Israelis who lived from the Stone Age until biblical times, 2,000 year-old Egyptian mummies, Stone Age European skeletons, 1,000 year old Iceland Vikings, Indian remains found in western US and Europeans who died over 30,000 years ago during the ice age

I cannot imagine what a woman, walking the Galilean hills 6,200 years ago may have looked like. What she ate, how she dressed and what she cared about, will remain a mystery, but after her skeleton was discovered in a cave near Pki'in, I know that we are related.

I and this woman who lived in these parts during the Chalcolithic period share 3.84% DNA. In other words, she and are related genetically.

So am I a descendent of the people of this land, am I part of the biblical kingdom of Israel?

Am I entirely Jewish? This is not at all certain.

I've just learned I am Indian too. A woman who died, two thousand years ago, and whose bones were uncovered in an Arizona desert, shares five percent DNA with me. That is more than my Galilean relative. So am I Apache? Not entirely.

I've also just learned I am 5% Viking - and 5.5% ancient Egyptian and even 5% European from the time of the Ice Age.

"In short," says Dr. Eran Elhaik, "you are Ashkenazi."

Dr. Elhaik is Israeli, had done two post-doctoral degrees at Johns Hopkins and today resides in the UK, teaching at Sheffield University while researching human genetics.

Identity politics in the 21st century have made DNA tests a trend, but they do not provide a complete and honest answer to the question of who we are.

They are based on modern societies, so a person can ask how Norwegian or Moroccan am I, but that does not take into account, that Norwegians themselves are made up of earlier populations that migrated to Norway long ago.

Alheik's work focuses on ancient, extinct populations. He has developed a product he calls Primeval DNA test. It is based on the genetic make-up of skeletons, mummies and body parts found around the world, belonging to people who lived thousands of years ago.

"This provides a much clearer genetic picture," he says.

The Primeval DNA test looks at seven ancient population groups: Israelis who lived from the Stone Age until biblical times, two-thousand-year-old mummies from Egypt, European skeletons from the Stone Age, 1,000 year old Iceland Vikings, Indian remains found in the western United States and even Europeans who died over thirty thousand years ago during the ice age.

I chose to concentrate on the Israelis.

Twenty skeletons were found in three sites in northern Israel, most believed to be 6,200 years old. Some are older, from 12,000 years ago.

Dr. Elhaik's test was able to determine how genetically close these remains are to modern ethnic groups of Jews.

He found Jews who originated in Yemen were genetically closest to the ancient Israelis.

Jews from Iraq came second, followed by Jews from Persia. Ashkenazi and Moroccan Jews had the least common DNA.

Druze, Bedouin and Palestinians were also related to the ancient remains in the same percentage as the Yemenite and Iraqi Jews, more than other Jewish ethnic groups.

Ashkenazi groups share more DNA with Vikings. They are also related to Indians who are known to be genetic descendants of people in northern Russia who crossed the Bering Straits to settle on the American continent. Iraqi Jews also share DNA with Indians.

So what do the numbers tell? It appears we are made up of a mosaic of ancient populations and are all related to some extent.

Correction: This article initially erroneously stated that the writer shares 38.4% DNA with a woman who lived in the Chalcolithic period. This data has now been amended to 3.84%.