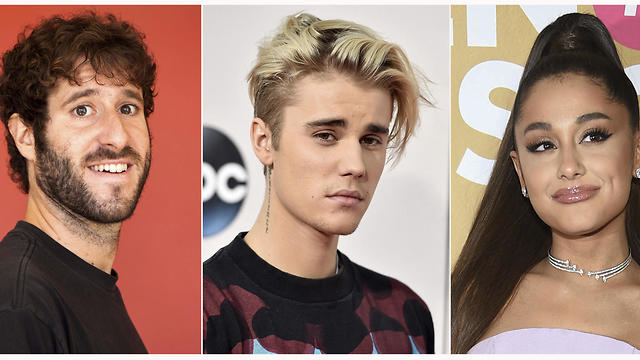 Rapper-comedian Lil Dicky recruits 32 of the world's biggest stars to illustrate the dangers our planet is facing in the wake of climate change; Earth Day celebrated annually on April 22

Justin Bieber, Ariana Grande and Leonardo DiCaprio have joined Jewish rapper-comedian Lil Dicky on a new song and video aimed at bringing awareness to climate change and Earth Day, which is Monday.

Earth Day, celebrated annually on April 22, marks the anniversary of the birth of the modern environmental movement in 1970, to raise awareness about the dangers of climate change.

Dicky, whose real name is David Burd, released the animated clip for the song “Earth” on Friday - where Grande is a zebra and Bieber is a baboon - who starts the song with the line: "Hi! I'm a baboon. I'm like a man, just less advanced, and my anus is huge!"

Jewish rapper-comedian Lil Dicky, Justin Bieber and Ariana Grande
Dicky, best known for his 2018 hit “Freak Friday” with Chris Brown, says he “didn’t really realize how insane our climate crisis is and how screwed humanity is about to be.” He adds, “If we don’t get our act together now, and change a lot about our fundamental behavior, Earth will become unlivable alarmingly soon.”