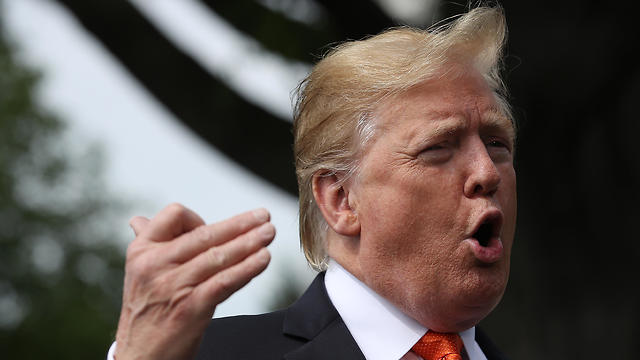 U.S. President Donald Trump's unexpected decision to ban all Iranian oil purchases after May 1 - ending exemptions for eight nations - came after hawkish economic and security advisors allayed the president's fears of an oil price hike, according to three sources familiar with the internal debate. The unprecedented move to fully sever Tehran's financial lifeline - finalized just days before the April 22 announcement - underscores the strong influence of hard-liners within Trump's inner circle. They had for months argued for tightening the sanctions over the objections of some State Department officials who favored allowing some partners and allies to keep buying Iranian oil.

President Donald Trump (Photo: Getty Images)
"No one's actually tried to take this all the way to zero," a senior administration official told Reuters, adding that forging a consensus among government agencies required "a lot of work." President Donald Trump has been eager to halt Iran's oil exports since slapping sanctions on the Islamic Republic last November for the first time since 2015, a move intended as punishment for Iran's nuclear ambitions and its support of armed militant groups in the Middle East.

Trump initially backed a go-slow approach, providing waivers to allies and trading partners such as China, India and Turkey.

The United States currently removes about 2 million barrels of oil per day from the world's supply through sanctions on the Iran and Venezuela industries. But Washington hopes that soaring U.S. oil production - now at an all-time high of more than 12 million barrel per day - will keep global markets well-supplied and hold prices down.

By the weekend of April 20, with the initial 180-day waivers given to countries due to expire May 1, top economic and security advisors convinced Trump that the time had come to cut off Iranian oil exports completely, according to the sources, who spoke on condition of anonymity.

The State Department had been engaged in talks with at least five of the eight economies holding waivers, according to sources - China, India, South Korea, Japan and Turkey. Trump discussed the matter with National Security Adviser John Bolton, Treasury Secretary Steve Mnuchin, Energy Secretary Rick Perry as well as Secretary of State Mike Pompeo. While Bolton and Perry backed ending the waivers, some in Pompeo's State Department reiterated worries about the potential for rising oil prices, the sources said, but they ultimately dropped their objections and supported the more aggressive policy on Iran. The decision caught several U.S. allies and Iranian oil buyers off-guard. China's Foreign Ministry issued a formal complaint to the United States. Separately, diplomats interviewed by Reuters from at least two large importers of Iranian oil said discussions about renewing their waivers continued until a few days before the announcement, suggesting the State Department had little time to brief partners on the decision.

Hassan Rouhani (Photo: Associated Press)
Oil prices struck six-month highs after the announcement, but have since eased back. Trump has long been anxious about rising oil prices impacting the economy and raising retail gasoline prices, and in his last tweet before the waiver decision, he said global oil markets were "fragile". He has asked members of the Organization of the Petroleum Exporting Countries to increase the flow of oil to compensate for losses from Iran and Venezuela. "This was clearly what he was balancing in his own mind," the administration official said. One senior administration official said Trump held conversations recently with the Saudi and Emirati leaders on oil prices and received assurances that the two oil producers will ensure the market is well-supplied. Saudi Arabia's energy minister responded by saying he saw no need to raise oil output immediately. OPEC production declined by 1.6 million barrels per day between December and March, according to the organization's figures. The Obama administration, which had imposed sanctions on Iran in 2012 to thwart its nuclear ambitions, kept its waivers in place through the duration of its pressure campaign. Obama's sanctions program ended with the Joint Comprehensive Plan of Action, an international accord with Tehran reached in 2015 that was meant to prevent Iran from getting a nuclear bomb. Trump ridiculed the deal and unilaterally abandoned it last year over the objections of the other signatories. International nuclear inspectors said at the time that Iran was abiding by the deal's terms. State Department officials said it was the Trump administration's intention from the start to bring Iran's exports to zero. But the timing had not been right until now.

The National Security Council, according to two sources, played a key role in driving the argument to end the waiver program - especially Richard Goldberg, a new member of the Trump administration and a longtime advocate for confronting Iran.

Goldberg was "instrumental," one of the sources said. Bolton added Goldberg to the NSC earlier this year. In 2018, while an adviser at the Foundation for Defense of Democracies think tank, Goldberg told Congress that rolling back Iran's activities required a "no-holds-barred, pedal-to-the-metal approach" involving political, economic and ideological warfare, along with overt and covert operations to remove Iranian forces from Syria and Yemen. White House economic advisors Kevin Hassett and Larry Kudlow had also called for ending the waivers, according to a second senior administration official. "We are doing this ... in a favorable market condition with full commitment from producing countries," said Frank Fannon, U.S. Assistant Secretary of State for Energy Resources. "We think this is the right time."