International March of the Living goes ahead in Poland
Photo: EPA 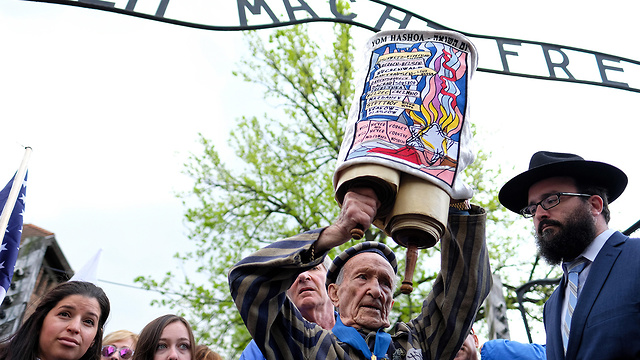 Why the March of the Living is so important

Opinion: Latests surveys show younger generation is worryingly ignorant - and at times apologetic - about the events of the Holocaust; with the number of living survivors of the Nazi genocide falling rapidly, it's our responsibility to keep their memory alive

Each year, on March 16, a contentious parade takes place on European soil. Although many people wonder why it still exists, it nevertheless goes ahead as planned every single year. This event is called “Remembrance day of the Latvian legionnaires” and its goal is to honor the soldier who fought for the Latvian Legion, which during World War II was part of the Waffen-SS. Thousands of veterans, commemorating Legionnaire Day, don their SS uniforms - symbols of horror and tragedy - and proudly march with their heads held high in the main square of the Latvian capital of Riga.

One of the greatest challenges of Holocaust remembrance is bringing the information about the atrocities that occurred some 80 years ago to the younger generation. It’s a huge task, as evidenced by the latest surveys - conducted all around the world - which reveal that an incredibly large number of people either don’t know or don’t believe that six million Jews were murdered in the Nazi genocide. Many have never heard of Auschwitz. This is a very worrying statistic, which points to the younger generation being incredibly ignorant about the horrific events of the Holocaust.

March of the Living starts at the gates Auschwitz (צילום: EPA)

Dwindling knowledge of the Holocaust is not an educational problem, but rather a social one, with people treating the Holocaust less and less as a grave lesson in history. This is evident by the rise of anti-Semitic attacks all throughout the world, which have skyrocketed in recent years. Political leaders, institutions and even ordinary people are becoming more accepting of hateful and inciting discourse, which sometimes carry an apologetic undertone toward the Nazis and their successors.

In the meantime, our ability to combat this phenomenon is diminishing. Holocaust survivors are dying at an unprecedented rate and those still alive are both physically and mentally weak in order to continue telling their stories which describe the horrors committed by the Nazi regime.

In a few short years there will not be a single Holocaust survivor left. The heavy responsibility of keeping the memory alive will be shouldered by their sons, grandchildren and great-grandchildren, in order to remind the world of where anti-Semitism, racism, hatred and ignorance can potentially lead to.

Israeli flags at the March of the Living (Photo: EPA)

The old Latvian Nazis, however, are not the only once marching in the middle of spring in Europe, we do as well. Every year, tens of thousands of Jews come to Poland to march in what used to be a horrific death camp where over one million Jewish men, women, and children died. We’ll continue marching until everyone in the world knows what Auschwitz is what kind of atrocities took place there.

Dr. Shmuel Rosenman is the co-founder and chairman of the International March of the Living.