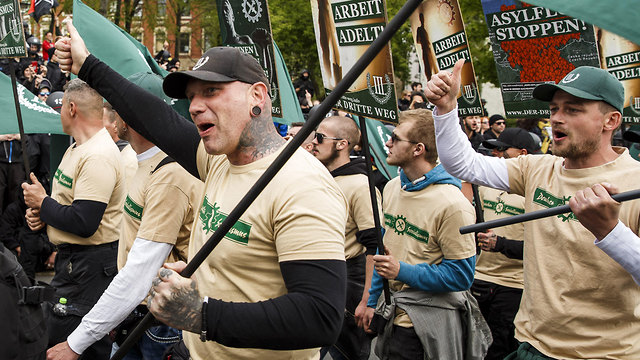 German security agencies say The Third Way, a relatively small party, has close ties to far-right extremists; Josef Schuster the head of Germany's Central Council of Jews: 'right-wing extremists are marching in Saxony in a way that brings back memories of the darkest chapter in German history'

Footage of the march Wednesday prompted widespread outrage in Germany and calls for authorities in the state of Saxony, where far-right sentiment is particularly strong, to step in.

"The images of the neo-Nazi march by The Third Way party in Plauen are disturbing and frightening," said Josef Schuster, the head of Germany's Central Council of Jews.

Noting that the rally took place on the eve of Holocaust Remembrance and Heroism Day the day when Jews commemorate the six million Jewish men, women and children murdered in the Holocaust, Schuster added that "right-wing extremists are marching in Saxony in a way that brings back memories of the darkest chapter in German history." Bellow footage of the rally.

Schuster added that: "If the Saxony state government is serious about combating right-wing extremism, it must not allow such demonstrations," Schuster said. "The Jewish community expects decisive action and visible consequences from the responsible authorities and the state government."

Owner of a Jewish restaurant attacked at a rally in October in Saxony, Germany (Photo: AFP)

German security agencies say The Third Way, a relatively small party, has close ties to far-right extremists. The march in Plauen took place to the beat of heavy drums made to look like those used by the Hitler Youth. Participants shouted slogans such as "Criminal foreigners out!" and "National socialism now!"

Saxony police said several hundred people took part in the march and described the day as a success from a police perspective because there was no violence. Though, Counter-protesters were kept away.

This as the German Chancellor Angela Merkel's center-right Christian Democratic Union is running neck-and-neck in recent opinion polls with the far-right Alternative for Germany party ahead of Sept. 1 state election in Saxony.

At a separate rally Wednesday, neo-Nazis marched through the western German city of Duisburg with signs calling for the destruction of Israel.