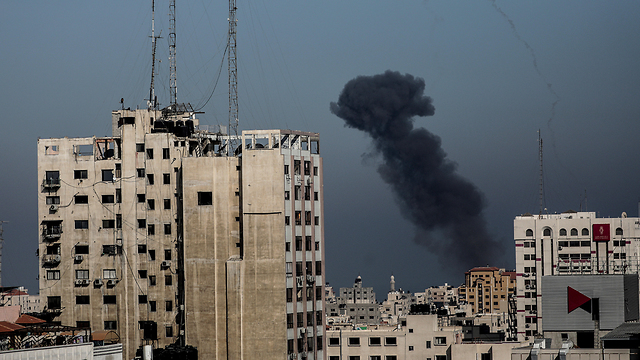 Latest round of Gaza violence must be used to restore deterrence

Analysis: Senior officials say Israel rejected the Egyptian ceasefire proposal, refusing to be dictated by the terror groups in Gaza, who apparently believed this flare-up would be over by Monday, when the holiday of Ramadan begins

At the moment it seems as though both sides, Hamas and Israel, want to escalate the current flare-up rather than let it die down. Gaza militants launch non-stop rocket attacks on Israel's civilian population, while Israeli military continues striking targets in the enclave.

Overnight, Israel appeared to have rejected a ceasefire proposal by the Egyptian intelligence officials, who remain in constant contact with the leadership of Hamas and Islamic Jihad - currently in Cairo.

The Egyptians apparently offered a deal which involves an immediate and unconditional cessation of violence, something that Israel is not willing to accept. Furthermore, Israel said it intends to not only continue striking Gaza but also to intensify the scale of the attacks. A message which I’m sure was conveyed to the Palestinians by Egypt. Thus, it seems this round up of border violence will continue in the upcoming days.

The current flare-up, unlike many others in recent past, is characterized by new methods of warfare used by both sides. The Palestinians - Hamas, Islamic Jihad and other smaller terror groups in the Strip - have introduced a new self-produced rocket, which can reach only a few kilometers into Israel but is tipped with a uniquely heavy warhead.

These rockets - called Burkan - were first developed in Syria in the midst of a civil war and their warheads usually contain dozens of kilograms of explosives. The terror groups thought the rocket would surprise the residents of Israeli communities near the Gaza border, but due to the rockets’ lack of precision, most of them landed in open spaces or failed to make it into Israeli territory altogether. This prompted Hamas to issue a statement, claiming Israel is hiding from the public the full extent of damage the rockets inflicted on the area.

So far both Hamas and Islamic Jihad have refrained from increasing the rocket range to over 40 km (25 miles) from the Gaza border. Although the Palestinian factions did make good on their promise to strike the cities of Beer-Sheva and Ashdod, the attacks didn’t bear fruit as most of the rockets had been intercepted by the Iron Dome.

“The armies of terror," as the IDF chief of staff calls them, have relatively few long-range rockets that can reach Tel Aviv as they are difficult to manufacture and the terror groups don’t want to empty their precious stockpiles so easily.

The IDF for their part have decided in this round of violence to attack almost exclusively, what the military labeled as “the power targets.” These targets include multi-storey buildings with military installations, buildings serving as headquarters for the terror groups and even private homes of the factions’ leaders (something the IDF hasn’t done in years), leaving them without a roof over their heads on the eve of the Ramadan holiday. The IDF also doesn’t hesitate to strike terror cells launching rockets, and since Friday at least eight terror operatives had been killed in Israeli attacks.

The Palestinian factions might have believed this flare-up would be over within a few hours since they probably didn’t want to wage battles during the Ramadan, which starts on Monday. Ramadan is considered to be a family holiday and dragging Gazan population into a war at this time would only increase the resentment to the Hamas leadership, which has ruled the Strip since 2007.

Senior officials say that Israel has no intention of agreeing to a ceasefire at this point, even if means that central Israel, including Tel Aviv, will be subjected to rocket attacks from Gaza. As far as Israel is concerned, the goal of the current round up of fighting - initiated by the Palestinians - is to restore its deterrence, which in recent months has been completely eroded.

Although it means the residents of the communities bordering the Hamas-ruled enclave will endure some suffering, the fighting will prevent another round of escalation being initiated by the terror organizations in Gaza in the next few weeks or even days.