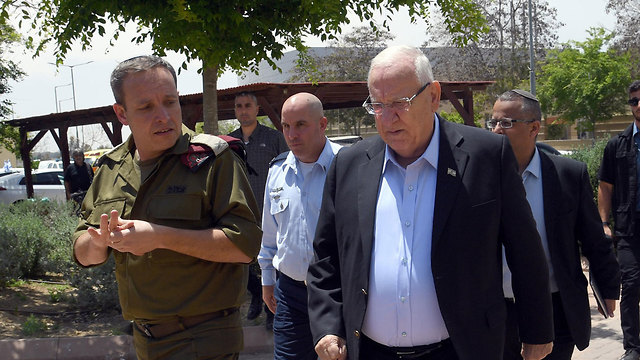 Visiting rocket-battered south, the president meets with community leaders and military commanders to express his support for both army and civilian resilience, urges local residents to follow IDF instructions

Israel will not rest until it has restored calm to its citizens in the south, President Reuven Rivlin told residents of the rocket-battered communities bordering Gaza on Sunday. The president made the visit in a show of solidarity after hundreds of rockets were fired at Israel since Saturday morning, mostly targeting the south.

“We are at the beginning of a tense week, and in the midst of a long period – too long – during which the people of the south are under attack from terrorist organizations in Gaza,” Rivlin said, as he praised the resilience of the local communities.

“Your steadfastness is not trivial and is not to be taken for granted," he added. "There are proud Zionists here, imbued with a sense of mission who know how not to give up and to fight for life here, on the borders, for the whole country.”

Rivlin met with leaders of the local regional councils, which have been under constant rocket attack since the latest round of violence broke out Saturday.

The president asked that the community leaders pass on to their constituents how important it is to adhere to the instructions of the IDF Home Front Command during attacks.

"Carrying out the IDF Home Front Command’s instructions will save us and give the IDF breathing room," he said. "Those orders were written in blood.”

At the end of his visit, the president said: “I want to thank you, and through you all the residents of the area. Thank you for your pioneering and for the inspiration you give us all by your behavior in situations like this.  We will not cease until quiet is restored here and our neighbors understand that living in peace is preferable."

House in Be'er Sheva after a directhit by rocket (Photo: Ilana Curiel)

He told residents they give the people of Israel srength. "No one can take that away from here” he added.

Head of the Eshkol Regional Council Gadi Yarkoni thanked the president, but added “we sustain serious psychological injuries every time the ‘Code Red’ alarm is sounded. That is our mission, to get our people out of the cycle of psychological harm".

After visiting the regional council, the president continued to the IDF Gaza Division where he met with military commanders and was briefed on the current situation.