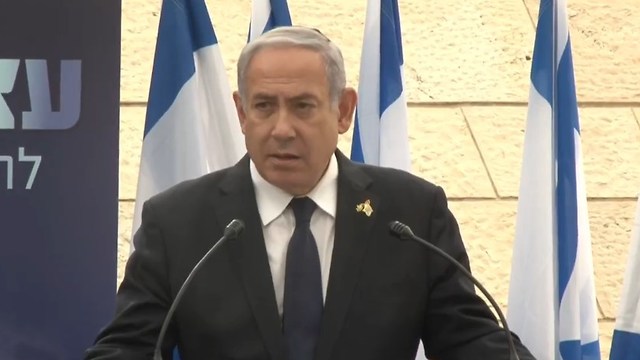 PM and president attend Yad LeBanim memorial service; sirens will wail at 8pm across the country as Israel remembers its fallen soldiers and terror victims; moment of silent reflection marks start of 24 hours of mourning, visits to gravesites of loved ones

Israel on Tuesday afternoon marked the start of Memorial Day for its fallen troops and terror victims with an annual remembrance service at the Yad LaBanim Memorial in Jerusalem.

In his speech, Netanyahu referred to the four Israelis killed during the latest round of fighting between Israel and Hamas earlier this week: "We send our deepest condolences to their families; every victim tears at our heartstrings. Who, more than us, knows this? The pain and longing don’t go away.

"Often, upon hearing the bitter news, relatives of those killed tell me that they need to learn how to breathe again. We do not hesitate to fight, we know that readiness to fight is the guarantee of our fate… We owe our survival to those who fell in battle," the prime minister continued.

Netanyahu completed his speech with a pledge to bring home the Israelis held captive behind enemy lines and the bodies of IDF soldiers being held by Hamas, "just as we brought Zechariah Baumel home," he promised.

President Reuven Rivlin spoke Tuesday afternoon at the memorial ceremony for Etzel fighters who fell in the battle for the village of Malcha. Shlomo Goldhor, who fought in the battle, also spoke at the event which was attended by Mayor of Jerusalem Moshe Lion.

At the beginning of his remarks, the president said “I remember the dear Etzel fighter who fell in the battle with sadness. I remember, I am afraid, that even after their fight to establish the state was over, the battle for memory did not end. For many years, the dead of the Etzel were not considered fallen Israeli soldiers and were not mentioned in the ‘Yizkor’ prayer. Appreciation for their immense contribution was not to be taken for granted. My dear friends, every year I come here to honor the fallen. But memorial ceremonies are not the main thing. Memory must live in our hearts and in our deeds, and in our dedication to the State and the people of Israel.”

The president addressed the pupils of the Ort Minkoff school, who take responsibility for the ceremony each year: “dear pupils of ‘Ort Minkoff’, each year you make efforts to hold this ceremony. You, the younger generation allow us to mix memory and hope. Thanks to you, we see the past through the lens of the future that you are part of. I would like to speak to you, and through you, to all our young people: we need you and your dedication, idealism and willingness to contribute. Take part. Join up. Give. Influence. Even seventeen-year-olds can change the world. May the memories of the fallen of the Etzel and the fallen of Israel be a blessing and may their legacy of victory be inscribed in our hearts forever.”

Memorial Day will begin proper at 8pm, as a one-minute air raid siren wails across the entire country. The annual remembrance day, which begins every year at sundown, sees Israelis unite in honoring the memory of its dead. The day of mourning ends the following sundown, when sadness gives way to the celebrations of Israel's Independence Day.

As of May 2019, 23,741 Israel Defense Forces soldiers have fallen in battle and some 3,150 civilians have been killed in terror attacks. Four of those civilians were killed this week alone in the latest deadly round of Gaza cross-border fighting between Israel and Hamas.

Many Israelis mark Memorial Day by visiting the graves of their loved ones who fell in battle or at the hands of terrorists.

The siren at 8pm also marked the start of the main Memorial Day event at the Western Wall plaza in Jerusalem, in the attendance of President Reuven Rivlin and IDF Chief of Staff Lt. Gen. Aviv Kochavi.

In Tel Aviv, the annual "Songs in the Square" ceremony was to take place at the city’s main Rabin Square at 8:30pm. It was to be attended by Tel Aviv Mayor Ron Huldai as well as many Israeli singers and celebrities.

At 9:15pm, a special memorial event was set to take place in the Knesset, called “Songs in Their Memory," attended by both Rivlin and Netanyahu.

On Wednesday, a two-minute siren will be heard across the country at 11am, followed by the main memorial service honoring the fallen IDF soldiers on Mount Herzl military cemetery in the capital. Rivlin, Netanyahu and Kochavi were all expected to attend the event.

The central memorial service for the victims of terror attacks was to be held immediately afterwards at 1pm.