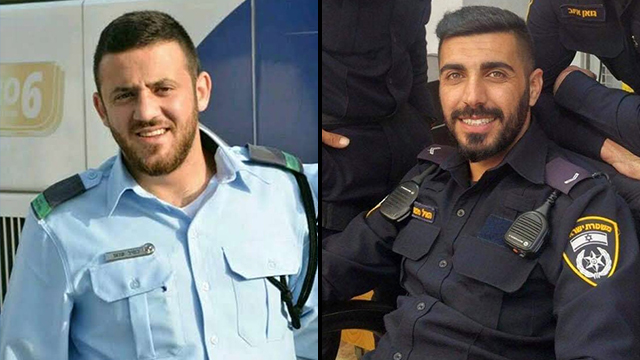 Jewish and Arab musicians unite to pay tribute to Border Police officers Hayil Satawi and Kamil Shanan, who were shot dead in an attack in Jerusalem in 2017; to their families, honoring their memories means righting the wrong of the Nation-State Law

This may be the first song written in memory of fallen Israeli servicemen, that is sung in both Hebrew and Arabic. For renowned Israeli musician Ivri Lider there was no hesitation. He wanted to write such a song, in honor of Hayil Satawi and Kamil Shanan, Druze Border Police officers killed nearly two years ago by gunmen at the entrance to the Temple Mount.

"Nearly 400 Druze servicemen have been killed in defense of the State of Israel," Lider said. "Not one song has been written in their memory. We honor them in cemeteries and visit their homes, but they are absent from the soundtrack of Israel."

On July 14, 2017, just before 7am, three gunmen, all citizens of Israel, boarded a bus to Jerusalem. Armed with rifles and a hand gun, they arrived at the entrance to the Al-Aqsa Mosque compound just as morning prayers were ending, and opened fire.

Kamil was killed on the spot, and Hayil, having heard the gunfire, rushed over. He managed to fire off one shot at one of the attackers before he too was killed.

"I never thought this could happen in such a holy place," says Hayil's father, Afif. "It is very painful to be here, so close to where we lost so much."

Ivri Lider and Nasreen Qadri's song, in Hebrew and Arabic

The lyrics honor Satawi and Shanan, as well as all the other minorities who deserve to be eulogized by Israeli mainstream. The song is a collaboration between Lider and Nasreen Qadri, an Israeli Arab singer and songwriter.

The families of Hayil and Kamil met Lider in Jerusalem, to talk about the song. They wanted this tribute to their dead sons to acknowledge their struggle to be accepted as equal citizens, especially after controversial legislation defined Israel as the nation state of the Jewish people alone.

Kamil's father Shakib, who once served as a member of Knesset, told Lider: "Death leaves an open wound. People think it can heal over time, but there is no end to the pain of losing a son."

He has spoken about his loss before, in a protest held against the Nation-State Law. Then he told the Israeli public: "I have become a second-class citizen and my son is a second-class fallen soldier."

An Israeli Druze protest against the Nation State LAw outside the Netanyahu family home in Caesarea (Photo: Zohar Shachar)

"It is an honor for us to take part in safeguarding Israel's security. But our numbers here in these police units, is far greater than our percentage of the general population. That should be recognized by the country," Shakib said.

Turning to Lider, he added: "I want the song to resonate with Israeli society, not just be a song you would hear once (a year), on Memorial Day."

Afif said: "Our kids all see military service as a must. Our sons died heroes and I am proud of them."

As they left Jerusalem, these two fathers carried their pain with poise; to Lider, they were an inspiration.

"We are brothers in this life," said Lider. "We must emphasize that so that our lives here can be better."