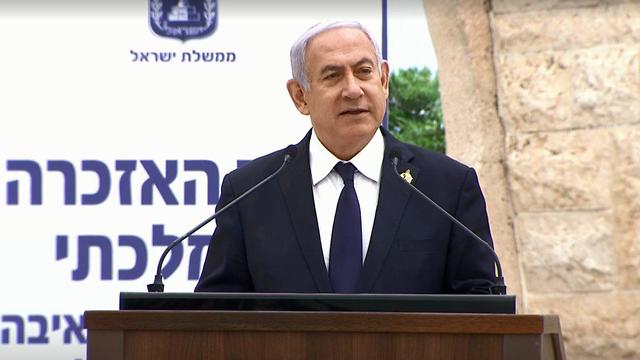 Israelis gather at cemeteries and memorials to mourn their fallen soldiers, terror victims

More than 1.5 million people expected to visit the more than 50 military cemeteries, other memorial sites across the country to remember the 23,741 soldiers, 3,150 terror victims; country falls silent as two-minute siren sounds throughout the state

The ceremony in honor of the victims of terror is taking place in Jerusalem's Mt. Herzl. participating are, in additional to victim's families,

President Reuven Rivlin, Prime Minister Netanyahu, Speaker of the Knesset and Supreme Court Chief Justice along with other dignitaries.

Netanyahu said "The IDF is resolute in its fight against the terror organization.This campaign is not over. We are considering the next step that must be taken to ensure the security of the Israel"

Prime Minister Netanyahu at the ceremony honoring victims of terror

Thousands of civilians have perished in atrocities targeting Israelis since the country's independence 71 years ago.

The State of Israel on Wednesday honored the 23,741 troops and 3,150 civilians killed in hostilities since the establishment of the state, with services and ceremonies across the country for Memorial Day for Fallen Soldiers and Victims of Terror. Four of the dead were killed this week in a massive barrage of rockets and missiles from Gaza.

The victims of Terror are being remembered in a ceremony on Mt. Herzl.

3.150 Israelis, victim of terror perpetuated against civilians, over the years since the establishment of the state of Israel, were honored in an annual ceremony with the participation of the President, Prime Minister, Supreme Court Justices, Speaker of Knesset and other dignitaries.

The nation fell silent at 11am for a two-minute siren that sounded across the country. At Jerusalem's ordinarily boisterous and bustling Mahane Yehuda market, shoppers and vendors froze in place and cafe patrons stood at their tables during the siren. Cars, trucks and buses stopped on highways across Israel, and their passengers exited to stand with heads bowed.

The siren was followed by a central memorial ceremony for fallen soldiers at Mount Herzl military cemetery, in the presence of President Reuven Rivlin, Prime Minister Benjamin Netanyahu and IDF Chief of Staff Aviv Kochavi.

Speaking at the Mount Herzl ceremony, Netanyahu hit back on Iran's announcement that it would partially withdraw from its nuclear deal with world powers in response to U.S. pressure.

"We will not allow Iran to obtain nuclear weapons," said Netanyahu, a long-standing and vociferous opponent to the July 2015 deal brokered by former president Barack Obama. "We will continue to fight those who seek to take our lives, and we will thrust our roots even deeper into the soil of our homeland."

Official ceremonies were held in cemeteries and other locations throughout the country, with representatives of the government and the Knesset in attendance.

The Defense Ministry said that it expected more than 1.5 million people to visit the country's 52 military cemeteries and hundreds of military burial plots stretching from Kiryat Shmona in the north to Eilat in the south. This year, ceremonies were also held at some 50 memorials throughout the country.

A memorial service for the Armored Corps at Latrun (Photo: AP)

On Wednesday morning, the Memorial Ceremony for the Fallen Soldiers of Israel and the Victims of Hostilities in Israel was held at the Jewish Agency Plaza in Jerusalem, and also commemorated the Jews murdered in anti-Semitic incidents around the world.

The Israel Air Force holds a service at its national memorial in Jerusalem (Photo: Alex Kolomoisky)

The ceremony focused on the victims of anti-Semitic attacks in synagogues in the United States, and was attended by US Ambassador David Friedman, the director of the Greater Pittsburgh Jewish Federation, Jeff Finkelstein, and the representative of the victims' families, Marnie Feinberg, who lit the memorial beacon.

Cars stop in Tel Aviv as drivers stand in silence for a siren to honor the dead (Photo: Shahar Goldstein)

"Anti-Semites do not care about the differences between us and they do not distinguish between labels like Chabad or Conservative or Reconstructionist," said Finkelstein. "In their eyes, we are all Jews."

The Israel Police also held a ceremony in the organization's section of Mount Herzl cemetery, to commemorate the 1,498 fallen officers who fell or passed away during or after their service.

The ceremony was held in the presence of Acting Police Commissioner Moti Cohen and senior officers of the Israel Police, officers and bereaved families.

"The history of Israel is accompanied by an unceasing struggle for the existence of the state, which is bound by a high price of blood," Cohen said.  "The Israel Police paid part of this heavy price and has had an important role in shaping the democratic character of the State of Israel."

The central gathering to usher in Memorial Day began at the Western Wall in Jerusalem at 8:01pm on Tuesday night, following a minute-long siren and moment of silence. Rivlin, IDF Chief of Staff Aviv Kochavi and Acting Israel Police Commissioner Motti Cohen were in attendance.

Rivlin spoke about the return last month of the remains of Zachariah Baumel, who was missing in battle for 37 years.

Baumel's return, Rivlin said, was an example of Israel fulfilling its pledge to Israeli mothers and fathers, who send their children into battle, that Israel will not rest until each and every soldier returns home.

The IDF chief of staff spoke about how each fallen soldier strengthens the security of the nation.

"The highest expression of the sanctity of life is doing all we can to minimize the extent of losses in battle and in peacetime. The operational objective is primary, and for that we endanger our lives. But refining combat methods as well as improving our training is the will of the fallen and we must work to fulfill it."

The day of grief ends at sundown, when celebrations to mark Independence Day begin.