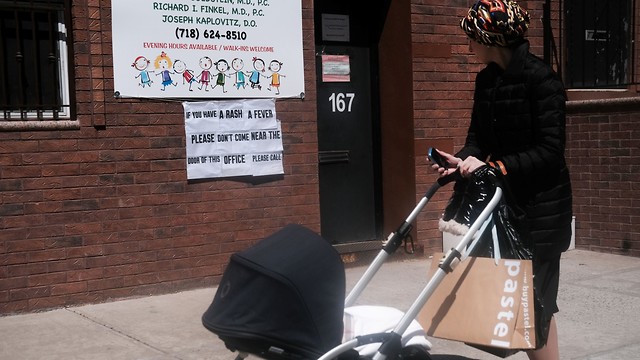 Why has measles epidemic hit the ultra-Orthodox so hard?

It's not a blind faith in God or disbelief in science that's behind the Haredi habit of not getting vaccinated, says senior doctor in Bnei Brak, warning that the outbreak could revive blood libel about Jews spreading disease

What do Jerusalem, Beit Shemesh, Safed, Beitar Illit and Bnei Brak have in common? They are all ultra-Orthodox cities, and all hold the Israeli record for measles outbreaks. Other cities with a large Haredi majority— Tiberias and Modi'in Ilit — are also at the top of the chart.

While it's clear the ultra-Orthodox public leads the anti-vaccination trend, Dr. Menahem Chaim Breier, vice chair at the Mayanei Hayeshua Medical Center in Bnei Brak, is certain there is nothing ideological about Haredi people choosing not to vaccinate their children.

A Haredi mother in Brooklyn passes by a poster in Yiddish calling on the public to get vaccinated (Photo: AFP) (Photo: AFP)

According to Breier, a sense of naivety and a belief that "God will stop diseases and not vaccines" are outdated perceptions of the ultra-Orthodox public.

The members of the community are keen to look after themselves, says Breier, referring to the religious law that states one must "take care of his life."

So what is it that makes the ultra-Orthodox public susceptible to anti-vaccine propaganda?

The lifestyle of the ultra-Orthodox community, says Dr. Breier, is behind the measles epidemic.

The fact that the community keeps to itself and doesn't mix with other sectors of the population makes fake news a lot easier to spread, and the truth much more difficult to expose.

This is backed by some evidence: the more a Haredi community is cut off from national media, the more measles cases it has suffered in the recent outbreak.

For instance, the extremely insular Satmar Hassidic community in New York has a higher rate of measles outbreaks than other Haredi communities.

"This sect of bastards (who preach against vaccinations) can have a field day in such communities, since the ultra-Orthodox are far less exposed to the media," says Breier.

"They feed lies to the rabbis and the public and distribute ridiculous pamphlets. These are people with mental issues, they're officially mental."

A public health campaign in the U.S. calling on the public to get vaccinated against measles (Photo: AFP)

"They'll say that vaccinations aren't kosher," says Breier. "I told this to Torah sages and they burst out laughing. Since when do we care about the kosher status of materials injected into our arms, rather than things we eat?"

Another factor that makes the rates of measles higher in the ultra-Orthodox public is the high fertility rate.

"It's crowded in the homes, it's crowded in the synagogues, in the educational institutions. People are in close proximity all day, and mothers are prone to postpone things (such as medical appointments) because of busy schedules," says Breier.

"They don’t even have time to go and get vaccinated."

According to Breier, the Haredi public also has fewer medical facilities in their communities, which he attributes to governmental failure. "They have more children and less nurses," he says. "The treasury is to blame for that."

Breier, who devotes his career to implementing healthy habits in the ultra-Orthodox community, has very senior rabbis on his side: they help him send the message to his patients that it's their duty to protect themselves and their health, and that there is a religious commandment to get vaccinated against measles.

He says that there is another religious duty that justifies getting vaccinated, and that is to avoid harming others by putting them in danger.

Another important reason to get vaccinated, says Breier, is not to encourage anti-Semitism.

He says anti-Semites use every excuse to prove that Jews spread disease — a common Medieval blood libel — and the current measles outbreak in New York could back these ancient lies.

"Rabbis repeatedly say that the Health Ministry's guidelines about vaccinations have rabbinical backing," Breier says, calling on the Haredi public to go out and get vaccinated, so that the measles outbreak can finally be halted.