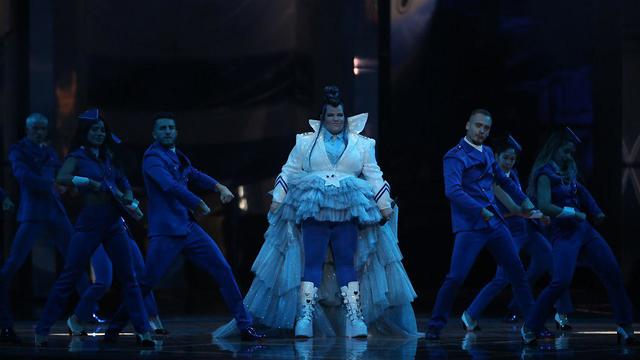 With 26 entrants fighting to win the crown, thousands of Israelis and tourists flock to the main show venue and the broadcast site at the city's beachfront; Madonna and Netta Barzilai to headline the live show at interval

Tel Aviv pulled out all the stops Saturday night for the Grand Final of the Eurovision Song Contest that began in the city at 10pm. Fans of the show had the city crowded from the late afternoon, with many main roads closed.

The Saturday show was the culmination of a week-long event, including two semifinals on Tuesday and Thursday.

Israel very much went all in for the event, building a Eurovision village on a beachfront Park, where Eurovision fans could soak up the atmosphere, enjoy food stalls and special live events at night.

The two semifinals were also broadcast live there on massive screens.

The Netherlands were favorites to win the competition, with Australia and Switzerland filling out the expected top three slots. They were to be competing against entrants from Albania, Azerbaijan, Belarus, Cyprus, Czech Republic, Denmark, Estonia, Greece, Iceland, Malta, North Macedonia, Norway, Russia, San Marino, Serbia, Slovenia and Sweden, all of which had to compete for a place in the final.

Eurovision fabns rooting for Spain at the show venue

Also in the final were Israel, which as host country automatically qualifies, and the main bankrollers of the event - Britain, France, Germany, Italy and Spain.

Thousands of Israelis and some 7,000 tourists were rooting for their home countries both at the main Expo venue and the beachfront broadcast site.

Rooting for Israel at the show venue

As the crowd and viewers await the final scores, live shows will take place on stage.

Meanwhile, in Jerusalem, thousands of ultra-Orthodox protesters rallied against what they said was the desecration of Shabbat by the event, calling it "an abomination."

One protester was arrested for assaulting a police officer.

The winners of the contest will be declared at around 2am, after each participating nation, not just those actually performing Saturday, has had a chance to cast their votes.