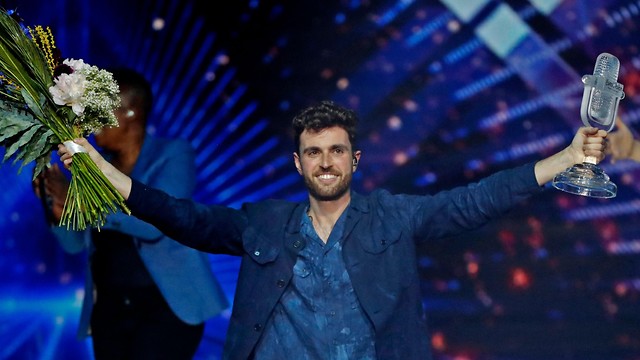 The Netherlands entry won out in the Grand Final of the Eurovision Song Contest in Tel Aviv on Saturday, bringing to a close a week of festivities in the beach city known for its 24-hour revelry.

Some 200 million people around the world were expected to be watching the annual campy contest, where 26 nations battled to be crowned Europe's best pop act.


Israel pulled out all the stops for a week of celebrations in the face of multiple calls for artists and fans to boycott the event due to the conflict with the Palestinians.

Despite the glitz and excitement of hosting the competition, Israel fared far less well than it did with last year's victory, as entrant Kobi Marimi came just 23rd with an emotional rendition of his song "Home."

Among the high-profile faces popping up during the event were designer Jean Paul Gaultier, Wonder Woman actress Gal Gadot, renowned Israeli musician Idan Raichel and the queen of pop Madonna.

Tel Aviv also built a custom Eurovision Village in a beachfront park, providing live entertainment and a food festival for fans from home and abroad. The two semifinals on Tuesday and Thursday were broadcast on massive screens at the village, as was Saturday's final.

Watching the 2019 final at the Eurovision Village in Tel Aviv (Photo: Yair Sagi)

Israel earned the right to host the show after Netta Barzilai carried off last year's prize with her catchy pop anthem "Toy."

Madonna had faced calls to boycott the event by a Palestinian-led campaign. But she rejected them, saying she would "never stop playing music to suit someone's political agenda."

The superstar performed her hit song, "Like a Prayer," marking 30 years to its release, and a new song "Future" from her forthcoming album "Madame X."

She caused some controversy when two backing dancers briefly appeared on stage wearing costumes emblazoned with the Israeli and Palestinians flags.

The European Broadcasting Union, which organizes the event, issued a statement condemning both incidents for going against the non-political nature of the contest.