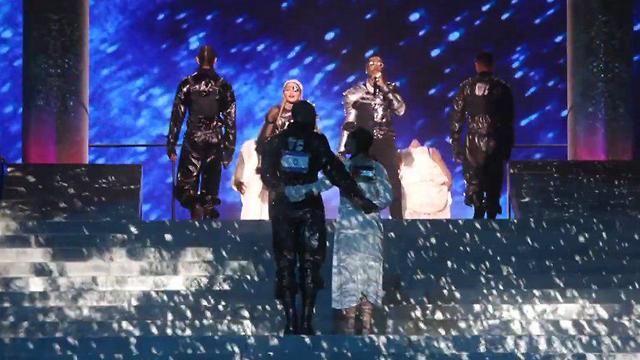 'Peace is not political,' says pop diva, who was rapped by contest organizer after two members of her troupe wore Israeli, Palestinian flags on their backs during performance; Israeli broadcaster says Iceland band could face censure for similar incident

Pop superstar Madonna on Sunday defended the decision for two of her dancers to embrace while wearing Israeli and Palestinian flags on their backs during her performance at the Eurovision Song Contest in Tel Aviv the day before.

Writing on Twitter on Sunday, Madonna said she was grateful "for the opportunity to spread the message of peace and unity with the world."

But the European Broadcasting Union, which co-produced the contest alongside Israel's national broadcaster KAN, issued a statement condemning the move immediately after her performance.

"This element of the performance was not cleared with the EBU and the Host Broadcaster, KAN. The Eurovision Song Contest is a non-political event and Madonna had been made aware of this," the EBU said.

Madame ❌ is a freedom fighter................I am grateful. For the opportunity to spread the message of peace and unity with the world. . #future #madamex #quavohuncho pic.twitter.com/UdMdbePB0L

This year's competition was more political than usual, held against the backdrop of a campaign by the anti-Israel Boycott, Divestment, Sanctions (BDS) movement that urged artists, fans and broadcasters to shun the event to protest against Israeli policies in the West Bank and Gaza.

But no singers or broadcasters pulled out, and only a small crowd of protesters turned up outside the venue, carrying signs in Hebrew, Arabic and English reading "No Pride in Occupation" and "Feminists for Gaza."

Madonna had also faced criticism from pro-Palestinian activists for performing at the event, which she brushed off last week saying that she will always speak up to defend human rights and hopes to see "a new path toward peace."

Hatari, Iceland's entrant, drew boos from the audience when the band held up small Palestinian banners live on air during voting. The EBU also condemned this move, saying it "directly contradicts the contest rules."

Meanwhile, the CEO of Israel's national broadcaster KAN, Eldad Koblenz, told Ynet on Sunday that the unauthorized display by Iceland's band could draw "punishment" from the event's organizers.

An EBU spokesman declined direct comment, saying the matter was under discussion.

EBU rules allow for disqualifying contestants who do not abide by requirements for a "non-political event". Asked what other penalties might be available, the spokesman said: "In the past there have been financial sanctions for rule breaches." He did not elaborate on these cases or sums.

Their flag display did not impress the Palestinian Campaign for the Academic & Cultural Boycott of Israel, which had urged countries to shun the Tel Aviv Eurovision. None did.

Koblenz was more upbeat about the political display by Madonna and her dancers.

"We are very happy that she came, certainly in a reality where very few artists are prepared to come to Israel," he said, while allowing that "perhaps she's had more successful shows."

Kan had no advance notice of Hatari's or Madonna's flag displays, Koblenz said: "That's the price of a live broadcast."