The Women of the Wall 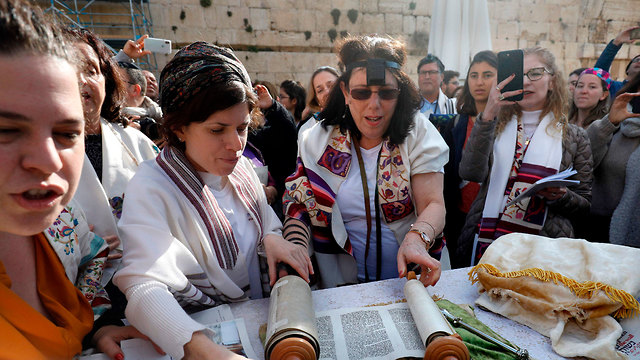 What Israel owes to Diaspora Jewry

Opinion: Most Israelis do not believe that our brethren abroad should have a say in how the country is run, and often only think of them when there is an anti-Semitic attack; but this is a wrong-headed approach, which needs to be corrected before it is too late

On the eve of the last election, if you were to conduct a survey of any 500 Israeli voters, as to the five main issues effecting their vote, Israelis would list many important things.

Some would say security concerns on the Gaza front and in the north, and the leadership's ability to navigate them. Other voters would cite the Palestinian question while yet others would emphasize cost of living and housing prices, poverty and other social issues.

Women of the Wall praying at the Western Wall (Photo: AFP)

Some would discuss the problems of religion and state, including civil marriage and divorce, the rabbinical courts' jurisdiction and much more.

But the status of relations between the State of Israel and the Jewish diaspora would probably not be on any list.

It is no wonder, therefore, that in five weeks of coalition negotiations, we have not heard of any party demanding the Diaspora portfolio.

The scene of a shooting attack at a San Diego synagogue in April 2019 (Photo: Reuters)

Israelis are not for or against Diaspora Jews and their relationship with Israel, they are simply indifferent.

If asked, most would say the entire Jewish people are one, regardless of where they live, but there is no need to take into account the perspective of Diaspora Jews when it comes to Israeli political decisions.

Israelis do remember Disapora Jews when they are victims of anti-Semitism, but even then, those memories are usually short-lived.

This relationship, it must be said, is not one-sided. Israel itself is far less important to Jews around the world than it once was.

They have other, more pressing agendas. They are concerned with questions of Jewish identity, but not in connection to Israel.

If this trend, both in Israel and among Jews worldwide is not reversed, we will soon see two separate Jewish people, who are similar in name only.

If this scenario is worrisome to any of us, we should push for a change in the government's priorities. Top of them should be our relations with Diaspora Jews. All of them - not just those convenient to us, regardless of the price we may have to pay.

Relations based on mutual convenience are no relations at all. We in Israel should talk less and listen more, and egalitarian prayer arrangements at the Western Wall are a good place to start.

Despite differences in our positions, stemming from our different realities, the goal should be diminishing those differences and not accentuating them.

The Diaspora should be front and center on the Israeli agenda. And if there is no party – preferably a coalition member  - willing to take up the challenge, we will see in just a few short decades, to our horror, that we are no longer one people. And by then it will be too late.