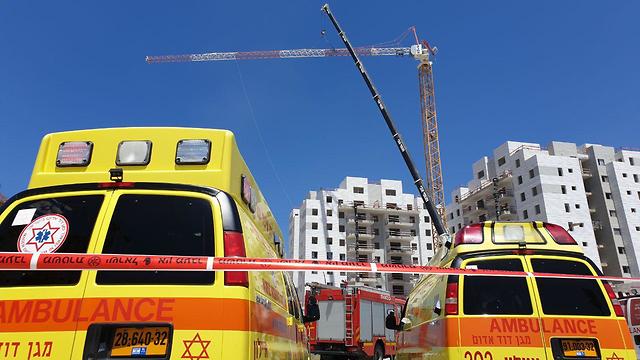 Horrific scenes from Yavneh site as worker who was killed in accident is left dangling in mid-air; only one third of 60 new government positions for safety inspectors have been filled, while building sites are inspected only once in two years.

Four people died Sunday when a crane collapsed sending the counterweights crashing to the ground in a residential building site in Yavneh, south of Tel Aviv. Three were construction workers from China, who were killed on the ground and the fourth was the crane operator whose body was trapped in mid-air for over an hour while spectators on the ground looked on in horror.

So far, seven construction workers died in Yavne in the course of one month.

The scene of a crane accident that left four dead in Yavneh (Photo: Avi Mualem)

Twenty construction workers have been killed on the job in Israel since the beginning of the year.

Late in 2018, the government announced steps to promote safety in the construction sector, but most promises were not kept, and the number of fatalities continues to rise.

An agreement signed by the government and the Histadrut labor federation last November came after the union announced a general strike in protest of the lack of safety laws.

The Finance Ministry agreed to fund 60 additional inspectors, to improve enforcement of regulations but so far, only one third of those positions have been filled.

The additional staff was supposed to increase safety in the 13,000 building sites around the country. State Comptroller Yosef Shapira in his last report noted that currently there is one inspection every two years in each site.

More inspectors were also supposed to enhance the enforcement of fines for minor regulation violations. The cost is still inconsequential to construction companies, but even those were not being enforced because of a shortage of manpower.

The site of the crane collapse in Yavneh

An NGO that monitors safety on Israeli construciton sutes reports that not one fine has been imposed since the beginning of the year.

Since 2018, there has been no investigation of safety violations.

The Housing Ministry revoked the license of only two contractors for safety law violations, and legislation to increase the ministry's scope and enable better regulatory action has been suspended until the new government is sworn in and ready to take up the cause.

A special unit set up by Israel Police last December is charged with investigation construction site accidents. So far, only one event has been investigated.

In order to stop the increase in fatalities, certain steps must be taken immediately:

The site of the crane collapse in Yavneh

• The European standards must be adopted for scaffolding, including an external net to prevent falling from great heights. Officials allow the new standards to be adopted gradually and over a three-year period.

• Contractors must finance training for safety inspectors. This was agreed to by the government but remains on paper.

• Setting a minimum pricing for safety measures included in all public tenders. Today companies are cutting costs to keep their tenders as low as possible

In response, the contractors' organization said they are setting up a new task force that will study each accident at building sites and inform contractors.

The Labor Ministry said they have closed 300 building sites pending safety measures since the beginning of the year. This is up from 240 in total during 2018. The law requiring a designated safety specialist on each site will be in effect at the end of this month.

Israel Police say they are conducting inspections at different sites and have issued 10 injunctions, nine of which were to stop all work on the site until deficiencies were addressed. The police arrested crane operators suspected of carrying forged permits, one of whom has already been indicted.