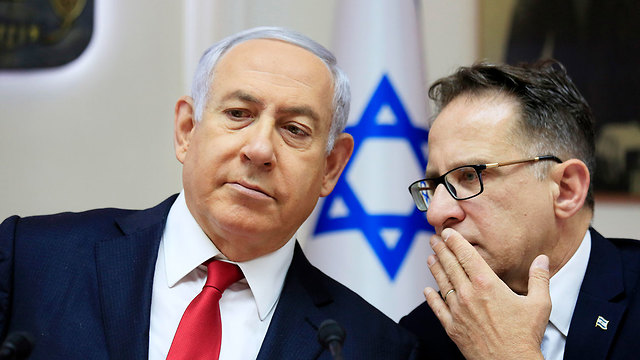 Netanyahu: Potential coalition partners need to get ‘back to reality’

With deadline looming, prime minister says he needs rationality to return so that he can 'form a strong and stable government for the State of Israel'; Likud rival Sa'ar slams plan to include immunity for PM in agreements

Prime Minister Benjamin Netanyahu on Sunday called on his potential coalition partners to stop making unrealistic requests, which he blames for the week-long stalemate in negotiations toward forming a government.

“I hope that we will find a way, as soon as possible, to bring them (party leaders) back to reality so that we can form a strong and stable government for the State of Israel that will continue to lead the country to new heights,” Netanyahu said during Sunday’s cabinet meeting.

Benjamin Netanyau at the weekly cabinet meeting in Jerusalem on Sunday (Photo: EPA)

His statements came after members of the cabinet voted to cancel the maximum number of ministers permitted in a government, a move that theoretically should make it easier for him to forge coalition agreements by offering parties additional prestigious positions.

Meanwhile, sources in the ruling Likud party said Sunday that the question of immunity from prosecution for Netanyahu, though not officially part of the coalition negotiations, is delaying agreements with potential partners. The prime minister is facing corruption charges in three separate police investigations.

The propsect of immunity being part of a coalition agreement has come under fire from former minister Gideon Sa'ar and his former aide Michal Shir, both Likud MKs and outspoken opponents of Netanyahu.

Both Sa'ar and Shir have gone on the record condemning these efforts.

Sa'ar, who placed fifth on the Likud list in party primaries ahead of the elections, is seen as a potential challenger to Netanyahu's position as Likud leader.

In such a situation, which is unlikely, the leading candidate would be former IDF chief Benny Gantz, whose Blue and White party tied Netanyahu’s Likud with 35 seats in the April 9 elections.

Article written by Media Line staff. Reprinted with permission from The Media Line