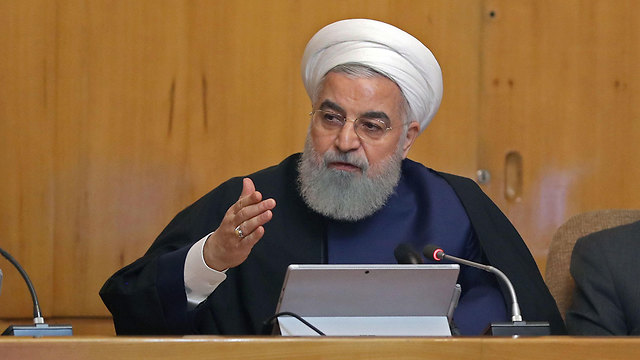 Iran: Today's situation isn't suitable for talks, resistance is our only choice

President Rouhani's statement comes following Trump's warning to the Islamic Republic, saying attacks on American interests in the region would be met with 'great force'

“Today’s situation is not suitable for talks and our choice is resistance only” IRNA quoted Rouhani as saying.

U.S. President Donald Trump said earlier on Monday that Iran would be met with “great force” if it attempted anything against U.S. interests in the Middle East, adding that Tehran has been very hostile toward Washington.

“I think Iran would be making a very big mistake if they did anything,” Trump told reporters as he left the White House on Monday evening for an event in Pennsylvania. “If they do something, it will be met with great force but we have no indication that they will,” he said, adding that he was willing to have talks with Iran “when they’re ready.”

The sources, who are familiar with U.S. national security assessments and spoke on condition of anonymity, said the United States was still trying to establish which militia fired the Katyusha rocket on Sunday and the extent, if any, of Iranian involvement.

The rocket fell in the Green Zone which houses government buildings and embassies and caused no casualties, the latest in a series of regional attacks the United States believes may have been inspired by Iran. Iran has rejected allegations of its possible involvement in attacks last week and Iran’s Iraqi allies rushed to condemn Sunday’s rocket blast.

The attacks include what Saudi Arabia described as armed drone attacks on two oil pumping stations within the kingdom on May 14 and the sabotage of four vessels, including two Saudi oil tankers, off the coast of the United Arab Emirates on May 12.

Yemen’s Iran-aligned Houthi group claimed responsibility for attacking the pumping stations. Saudi Arabia accused Tehran of ordering the attack. Tensions between Washington and its Sunni Muslim Gulf Arab allies on one side and Tehran and its Shi’ite Muslim proxies on the other have been flaring for weeks.

European and U.S. government sources believe Shi’ite militias based in Yemen or Iraq carried out the attacks in Saudi Arabia and near the UAE, likely with Iran’s encouragement.

Pipeline in Saudi Arabia, believed to be attacked by Iran-backed forces (Photo: Reuters)

The two U.S. sources said they are still trying to establish whether the rocket attack, if inspired or directed by Iran, was designed to send a specific signal to the United States.

The incidents all took place after Trump decided to try to cut off Iran’s oil exports, roughly a year after he withdrew from the 2015 nuclear deal between Iran and six major powers.

Trump’s decision to abandon the deal that restricted Iran’s potential pathway to developing a nuclear bomb in return for relief from economic sanctions angered Tehran, which accuses Washington of breaking its word. Iran denies ever having a nuclear weapons program.

In what may be a sign of Iranian displeasure, an Iranian news service reported on a fourfold increase in Iran’s rate of production of low-grade uranium enrichment.

Quoting an official at the Natanz enrichment plant, the semi-official Tasnim news service said Iran was accelerating the rate of production at which it refines uranium to 3.67% fissile purity, suitable for civilian nuclear power generation.