The grave of Stefan Vladislav 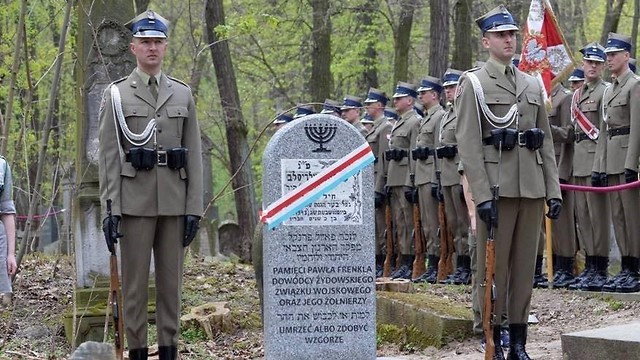 An Israeli burial for a Jewish hero of the Holocaust

Opinion: Shouldn't the Jewish state honor Stefan Vladislav, shot dead by Nazi soldiers just weeks before the Warsaw Ghetto Uprising and whose grave became a symbol of resistance against the genocide that swept Europe?

I want to tell you an amazing story. On April 18, 2016, the Representative Honor Guard Regiment of the Polish Armed Forces saluted Stefan Vladislav at the Jewish Cemetery in Warsaw, Poland. Stefan was killed 73 years earlier on February 4, 1943 in a firefight with Nazi stormtroopers when trying to exit a sewage pipe while carrying arms to his comrades.

According to Haim Lazar-Litai, an historian and partisan who fought against the Germans in the forests during World War II, the Nazis had probably been tipped off to his presence and had planned to ambush him. But Stefan reached the entrance to the pipe first, and "was quick to open fire at the Germans." He killed one and injured another, and the third ran to get help.

Representative Honor Guard Regiment of the Stephan Vladislav's grave at the Jewish Cemetery in Warsaw (Photo: Museum for the Jewish Soldier in WW2)

The German troops who then came to the site shot and killed Stefan. He was just 20 years old.

Vladislav's body was seized from the Nazis by his comrades from the Jewish Military Union, a resistance movement in the Warsaw Ghetto that was affiliated to the Irgun - a Zionist paramilitary organization that was at the time fighting for Jewish independence in pre-state Palestine.

The members of the Jewish Military Union gave Stefan a Jewish burial and wrote on his grave, "Fell while fighting to free his people."

The grave was a symbol of a solitary Jewish resistance fighter in Poland who was killed weeks before the Warsaw Ghetto Uprising began in April 1943. The headstone was carved in secret during the war, and replaced in 2016 by a new shining headstone with the perhaps puzzling inscription: "In Memory of Pawel Frenkiel, the leader of the Jewish Military Union and his fighters."

Later still, a line was added in Hebrew and Polish from the anthem of revisionist Zionist youth movement Betar, written by its famous founder Ze'ev Jabotinsky: "To die or conquer the hill."

Although a lot has been said of the heroes of the Warsaw Ghetto Uprising, much anout the role of members of the Jewish Military Union remains untold.

Was Stefan Vladislav his real name? It is also the name of a 13th century monarch of Serbia.

The origin of the name sounds Polish, and while many Jews at the time kept their original Hebraic names, the circumstances during the Nazi occupation forced many fighters to use aliases.

We know that Vladislav was given the task of contacting the Irgun in Mandatory Palestine, that his non-Jewish demeanor and that his fluent Polish aided him in his missions.

A memorial to the Warsaw Gehtto Uprising on its anniversary

Moshe Poznerson, one the Jewish Military Union's commanders, said that Stefan was thrilled every time he was sent on a dangerous mission. For example, on May 17, 1942, he went to the local Red Cross with a letter addressed to Hillel Zur, who trained members of the Irgun in Poland before returning to Mandatory Palestine.

The coded letter said: "I'm a clerk in the mutual aid of the public," and added, "I live in horrible conditions. I lack basic means for physical existence. I miss you very much. Write back with how you are doing". Three more words were censored by the Germans, who probably tried to decode the letter.

A wall from the Warsaw Ghetto now forms part of a national memorial in the Polish capital (Photo: AP)

The letter made it to Zur three months later without him being able to make anything of it. It is now on display at the Museum of the Jewish Soldier in Jerusalem, and one could only guess what would have been the outcome had the letter reached Zur earlier, and had Zur been able to understand it.

When Adolf Eichmann was put on trial in Israel in 1961, Dr. David Dubinsky, who was a senior member of the Jewish Military Union during the war, told the story of Vladislav.

Using news reports from the time, his story made it into "Flags over the Warsaw Ghetto," a book about the 1943 Jewish uprising against the Nazis written by the late Moshe Arens.

It is thanks to Arens that Stefan's name became known. Surely it's time to bring the person who "fell while fighting to free his people" to a final resting place in the Jewish state?