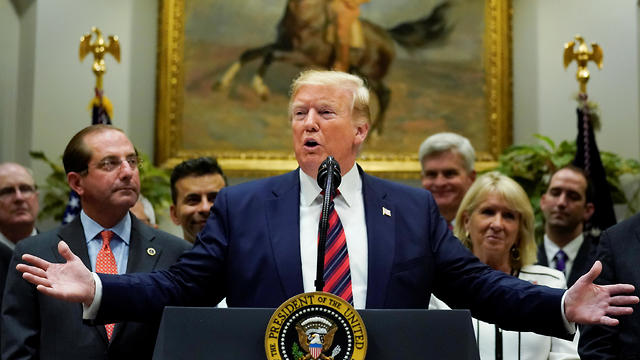 What does Trump hope to achieve in Bahrain?

Opinion: The Palestinians, who are boycotting the conference, are looking ahead towards a different, substantive peace plan that will include the important issues - including Jerusalem and refugees

"New and exciting opportunities": A term you would expect to see in a sales pitch for a real-a-state project and not as the first chapter of the "Deal of the Century", now reduced to an economic workshop in Bahrain, but designed to end one of the most complicated and bloody conflicts in the world.

What is the Trump administration trying to achieve here?

Spoiler alert: it is not a long-lasting peace between Israel and the Palestinians.

It may have been, initially, but the administration was quick to realized that these two parallel lines, Israel and the Palestinians, were simply not interested in meeting.

The "Deal of the Century" has become code for other things, all of which are not all that bad for Israel.

For decades, normalization of relations between Israel and the rest of the Arab world and the economic boom that is expected to follow was to be the result of the resolution of the conflict.

Trump has been trying to change around the order of things. He thinks improving economics will bring about an end to hostilities.

The Americans hope the Bahrain event will include Arab business leaders, including some from Saudi Arabia, who will join American executives from big companies like from Coca Cola and Amazon.

Chances of a successful event are unclear. What is evident though is that no Palestinians business leaders will attend  - certainly not any that rely on the Palestinian Authority for their business success.

Even the political part of the deal does not claim to bring about an end to the conflict. The intention is only to set new parameters that are more favorable to Israel.

As disappointing as all this might be, it also negates any need for mass Palestinian protest. Demonstrating for Jerusalem as the Palestinian capital or the right of return is one thing, but protesting a workshop in Bahrain, is quite another.

The Palestinians themselves have been running their own campaign for over a year, claiming financial desperation. Protesting a move that may send vast amounts of money their way, would be a bit hard to explain, even by Palestinians standards.

Mahmoud Abbas is troubled. He travelled to Qatar earlier this week, to thank the Qatari leadership for their contribution to the Palestinian Authority, but also to make sure they stand with him in opposition to the Saudis.

The Palestinians seem to be resigned to Israel's warming relations with Arab governments.

They are looking ahead to a real, substantive peace agreement, dividing territory, dealing with the questions of Jerusalem and refugees. Jordan, they are sure, will stand by them even if others don't