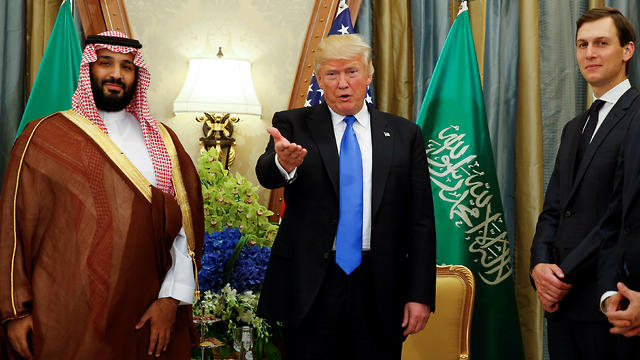 In official statement, Abu Dhabi stresses so-called workshop will advance and support political solution for Israeli-Palestinian conflict; PA will not attend summit, says it was never consulted; meeting with not deal with fundamental issues such as Jerusalem, refugees

Saudi Arabia and the UAE on Wednesday confirmed their participation in the long awaited roll-out of Donald Trump's much anticipated peace plan, at an economic workshop next month to be hosted by the Kingdom of Bahrain and in cooperation with the U.S.

The Saudi Press Agency (SPA) reported that Minister of Economy and Planning Mohammed bin Mazyad Al-Tuwaijri is scheduled to take part in the workshop, entitled "Peace for the sake of Prosperity" and to be held on June 25-26. The Palestinian Authority said earlier this week that it will not be attending the workshop.

The Saudi report said that the minister's participation in this event is a continuation of the Kingdom's firm positions in support of the Palestinian people "in a way that achieves their stability, growth, and good living, and achieves their hopes and aspirations and yields security, stability and prosperity for the region in general."

The UAE Ministry of Foreign Affairs and International Cooperation said the Emirates "supports all international efforts aimed at supporting economic progress and increasing opportunities in the region, and alleviating the suffering of people in the region, particularly our brothers in Palestine,'' in the hope that the workshop will lift the Palestinian people out of misery and "enable them for a stable and prosperous future."

The statement pointed out that their participation in the summit is not in conflict with the UAE position on the issue of Palestine, and reiterated that "such efforts will only advance and support a political solution that culminates in lasting and comprehensive peace between the Palestinians and Israelis."

"The cabinet wasn't consulted about the reported workshop, neither over the content, nor the outcome nor timing," Shtayyed told Palestinian ministers in Ramallah in the presence of reporters.

Ahhmed Majdalani, the Palestinian social development minister and a member of the executive committee of the Palestine Liberation Organization, said later MOnday that the PA would not be attending.

"There will be no Palestinian particaption in the Manama workshop," he said. "Any Palestinian who would take part would be nothing but a collaborator for the Americans and Israel."

In a joint statement with Bahrain last week to announce the workshop, the White House said the gathering would give government, civil and business leaders a chance to rally support for economic initiatives that could be possible with a peace agreement.

"The Palestinian people, along with all people in the Middle East, deserve a future with dignity and the opportunity to better their lives," Trump's senior adviser and son-in-law, Jared Kushner, said in a statement Sunday.

"Economic progress can only be achieved with a solid economic vision and if the core political issues are resolved."