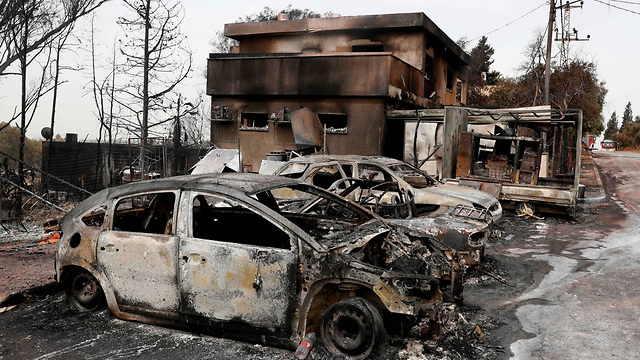 Arson, power cables might be behind Israel’s devastating wildfires

Fire investigators say Lag B'Omer bonfires are unlikely to be cause of at least some of the massive wildfires that raged across the country over the weekend, leaving dozens of families homeless

Firefighting authorities said Sunday that a massive bushfire in one of the communities in central Israel, where at least 40 homes have been burned over the weekend, might have been caused by arson.

National Fire and Rescue Authority is investigating whether a blaze in the religious moshav of Mevo Modi'im in central Israel was started deliberately after discovering the fire in the community had several points of origin. The investigation is still ongoing.

Overall, some 50 homes were destroyed by the blaze, which was exacervated by the extreme heatwave that hit the country over the weekend. At least 16 people suffered smoke inhalation and 13 others had light burns, including some of the 1,000 firefighters who battled at least 1,023 conflagrations across the country.

In the meantime, fire investigators said the blaze in the communities bordering Gaza, where dozens of homes were also damaged, was likely to have been started by a failure of Israel Electric Corporation power cables in the area, and not by Lag B'Omer bonfires.

The IEC responded by saying the investigation conducted by the company’s own fire department contradicts the findings of National Fire and Rescue Authority and points to arson and bonfires as the main causes of the conflagrations.

Thus, it was decided by the two bodies to establish a joint investigation team in order to thoroughly examine the causes of the wildfires.

On Friday, the police arrested three suspects from East Jerusalem on suspicion of arson in connection with fires in the area of Mount Scopus in the holy city. The suspects were questioned and their arrest was extended at the Jerusalem Magistrate's Court.