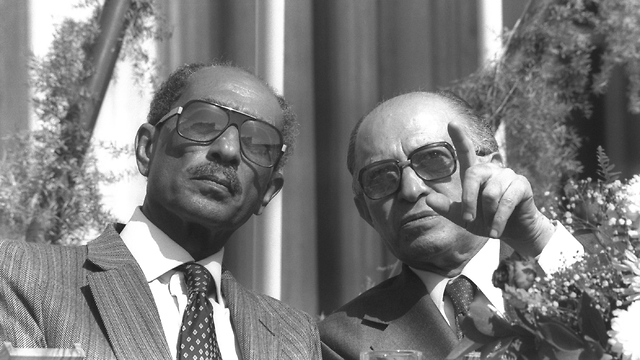 Residents of Beersheba celebrate 40 years anniversary of Egyptian president Anwar el-Sadat's historical visit to their city to sign a Regional Peace Scroll; 'we remember our wars with Egypt… this was like coming full circle,' says resident

The southern city of Beersheba is getting ready to commemorate the 40th anniversary of the historical visit by Muhammad Anwar el-Sadat, the late Egyptian president who signed the Regional Peace Scroll in the city during the 1979 peace process with Israel.

It was a warm Sunday; the residents of the then-small and peripheral city gathered in the dusty streets to pbserve history unfold outside their homes — the distinguished Arab leader Sadat was to arrive in the city accompanied by state leaders and sign the historical treaty, some two months after the signing of the peace deal between the two countries.

But why Beersheba? Sadat was a man deeply connected to biblical texts. He wanted to visit Abraham's well, an ancient site in the city traditionally recognized as the place where the Jewish patriarch signed the very first peace treaty with another nation. The Egyptian president wanted to go full circle and his wish was granted. Beerhseba's mayor Eliyahu Nawi had only one week to prepare. The desert city was scrubbed clean, and local newspapers hailed "the opportunity for simple people to make an effort and make the event unforgettable." School kids were told to draw Sadat and Begin, and the wining drawing was to be presented to the President. Local businesses went wild: a local cloths shop offered an Egyptian flag with every purchase, and the local college announced 20 percent off Arabic classes. The crowds were angry to learn that on the day of the visit, a hot day, local kiosks all raised the prices of water bottles to an outrageous 10 Israeli pounds. Yael Bracha, at the time a young secretary at city hall, recalls the excitement: "We still remembered our wars with Egypt," she says. "During the 1967 war, there was a round up of Egyptian prisoners near my house in Beersheba, some 2000-3000 of them. All of us schoolkids would go after school to see them, we would take water and snacks and give them, we also chatted. Some of us knew Arabic from home…." "They were nice," Brahca recalls. "They didn’t feel like the enemy. Then they were sent home to Egypt, and when Sadat came it was like coming full circle."

Sadat's Helicopter was on its way from el Arīsh in Egypt. Yotam Doron, then a young Israeli Air Force pilot, escorted the helicopter with his jet. "I was told that I can't trust the Egyptians to make it in time. But the president was right in time. I also remember that all his team had mustaches," he says, reminiscing about 1979 Middle Eastern fashion.

The main event took place at the town hall square. Leaders made excited speeches about the end of war. The mayor and Israel's president, both born and raised in an Arab-Jewish neighborhood in Jerusalem, gave speeches in fluent Arabic. "Even those of us who weren't born in Islamic countries wish to know more about your magnificent culture, noble people and country," said Navon. "The deal we signed (with Egypt) is just one part of a comprehensive peace plan with the entire region," he added, "things that once looked impossible now look like reality, and tomorrow things that now look like a dream will come true." Sadat responded in same manner: "(History) will judge us not for our tough positions, but for the wounds we have healed, the souls we saved, the suffering we prevented." The Egyptian president was impressed, mostly with the fluent Arabic of the Israeli leaders. In a private conversation after the ceremony, the mayor recalled Sadat saying that "it was Arabic worthy of Arab leaders." But he wasn't finished. He told the mayor that he is sorry to learn that "the Jews of Mizrahi origins, including Egyptian Jews, are not fond of the Arabs."

Decorating the streets of Beersheba ahead of Sadat visit (Photo: Tuviyahu Archive, Ben Gurion University) (Photo: Tuviyahu archive, Ben Gurion University)
"I know that the last 30 years of Jewish existence in Egypt were rough. But is that enough to forget 3,000 years during which Jews enjoyed equal rights and took part in developing Egyptian culture and economy, and even in defending its borders?" said Sadat. The Egyptian president then drove around town, the masses waving at him. There were even two camels, decorated with a sign calling for peace by the Peace Now movement. Beersheba's current mayor, Ruvik Danilovich, was only nine at the time, but he remembers the event vividly. "Today I understand the meaning of that visit. This is the city of Abraham, holy to both the people of Israel and Muslims. This was a line connecting the first peace deal the Jewish people ever made, with modern times."