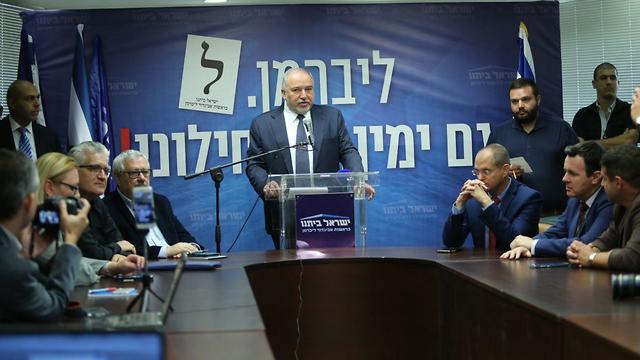 Yisrael Beytenu leader Avigdor Liberman said Monday that his party plans to keep insisting on the draft law for the ultra-Orthodox public, regardless of the impasse it has caused in coalition talks ahead of the Wednesday deadline for the establishment of a new government.

"I won't to be party to a Halachic government," Liberman said, referring to religious Jewish law.

"We've been making our position about the draft law clear since February 2018. It's obvious to everybody that this is a principle, and that's what the Likud Party is most afraid of," said Liberman.

"They (the Likud) have to understand that this is a principle, it's not personal. It's not revenge," the Yisrael Beytenu head said.

Liberman also said that he has stood by Prime Minister Benjamin Netanyahu since the April 9 elections, recommended him for the prime ministry, supported Netanyahu's bill to enlarge the number of ministers in his cabinet, thereby facilitating coalition agreements, and supported his nominee for state comptroller.

Earlier Monday, MK Evgeny Sova of Yisrael Beytenu told Ynet that "the ball is in the prime minister's court," and that if Netanyahu persuades the ultra-Orthodox United Torah Judaism party against making changes to the draft law that would weaken it, Yisrael Beytenu would happily join the government.

Sova further said that the party would vote for hold yet another round of elections, "if that's what the Likud Party desires."

Netanyahu has pushed for a bill to dismantle the government, proposed by known Netanyahu ally and Likud MK Miki Zohar, after he was unable to assemble a coalition government.

The bill is aimed at preventing President Reuven Rivlin from giving another lawmaker either from Likud or elsewhere, the chance to form a colaition instead. Netanyahu has until Wednesday to strike his deal.

The prime minister needs the vote of 61 MKs to approve the dissolution of the Knesset. If the bill was indeed brought to the Knesset on Monday, all coalition parties were expected to support it, except for the Union of Right-Wing Parties, who were yet to announce their decision.