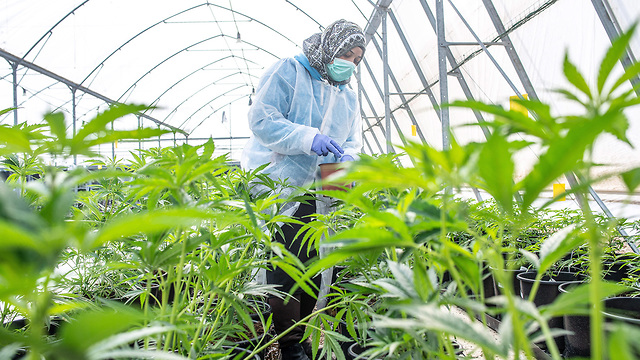 Yohanan Danino is just one of many retired Israeli defense officials who have entered the field of medical marijuana, taking advantage of new laws permitting international distribution, among the throng are former PM, army chiefs and even an Air Force commander

A growing number of prominent ex-defense and security officials are joining Israel’s blossoming medical cannabis business in hopes of cashing in on a lucrative local industry that is beginning to take off.

In January, Israel’s cabinet approved a law permitting the export of medical cannabis, thus paving the way for growers to expand into international markets. The country’s economy could reap hundreds of millions of dollars a year from the move, with the legal global market expected to reach $146.4 billion by the end of 2025, according to a recent report by Grand View Research.

A greenhouse growing cannabis on Kibbutz Revadim (Photo: EPA)
Last week, former IDF chief of staff Dan Halutz was appointed chairman of a newly established medical cannabis company CFR. Last fall, former prime minister and defense minister Ehud Barak was named chairman of another medical marijuana firm InterCure. In addition, ex-Air Force commander Ido Nehushtan chairs Cannasure Insurance Service, and Nitzan Alon, a retired major-general, is CEO of the cannabis cultivator Canndoc. Earlier this year, former police commissioner Yohanan Danino was appointed chairman of Together Pharma, a company licensed to grow, export and distribute medical cannabis products. “It was very natural for me to come to Together Pharma and try to take it to very high levels with the big potential that I see in this field,” Danino told The Media Line. “Managers with a strong security background… have experience that can be relevant to the unique, young and developing business world of medical cannabis.” Danino, who headed the country’s police force from 2011 to 2015, found himself in a rather singular position when he joined Together Pharma. Having once helped formulate stringent security guidelines for cannabis cultivators, he now has to follow his own rules.

“As police chief, I took care of the other side of cannabis: the illegal side. I put all the security demands on the growers that obtained the license, and now in my new position, I have to obey all the orders I gave many years ago,” Danino chuckled.

“The goal,” he continued, “is to ensure that this cannabis goes to the patients who need it according to the law.”

Following his retirement, Danino was chairman of Migdal, one of Israel’s largest insurance companies. He revealed that several cannabis companies had approached him because of his extensive business experience in the private sector. One factor that persuaded him to enter the medicinal marijuana sphere, however, was witnessing the positive impact the plant had on cancer patients. Ultimately, he realized that it was entirely different from the illegal recreational market he had encountered during his tenure as police chief. Nevertheless, while serving as police commissioner, he called on the government to reexamine the laws surrounding recreational marijuana. In 2015, he said: “I think it’s time for the police, along with the state, to reevaluate its traditional position.”

How security comes into play

Security – on a domestic level as well as internationally, following approval for export – remains a major, ongoing concern in Israel’s medical cannabis industry, which is now entering uncharted territory. So it is perhaps no surprise that many former high-ranking figures in Israel’s security sector who are skilled at dealing with high-risk situations and unknowns, are highly sought after.

In March, there was an attempted robbery at a warehouse operated by Tikun Olam, one of Israel’s leading medical cannabis suppliers. Armed and masked thieves raided a facility located near the Sea of Galilee, marking the first such major cannabis theft attempt in Israel. Tikun Olam stated that its warehouse was empty at the time and nothing was stolen.

Every medical cannabis company in Israel must meet high quality standards in accordance with a broad range of Health Ministry guidelines, which correspond to growth, manufacturing, distribution and security processes. These rules specify that utmost attention be paid to security and that “every permit holder must take necessary measures to prevent cannabis loss or theft.”

Among the security concerns in the supply chain, the Health Ministry lists the involvement of criminal elements, theft, unauthorized persons using the drug and medical cannabis leaking into the black market. Danino revealed that he had personally helped Together Pharma address such issues thanks to his professional expertise, and that he remains active in attempting to prevent medical cannabis from leaking into the black market. “I was police commissioner, and before that I used to be the head of intelligence and investigations,” Danino elaborated. “During that time, I was responsible for some aspects linked to regulations whose purpose was to avoid medical cannabis falling into the wrong hands.”

The former commissioner asserted, however, that the chances of such leaks were almost nil due to industry protections already in place, ranging from physical precautions and security guards to cameras and other technologies installed at greenhouses and farms. Nevertheless, he acknowledged that cannabis has unique security needs because it is a plant grown outdoors and in greenhouses rather than being a pharmaceutical drug produced in a lab.

“There’s also all the intelligence around the (industry): background checks on workers and on every move that is going to happen on the farms. Every cannabis company spends a lot of money on these issues,” Danino says. “Exports aren’t an issue if you know how to do it.”

Some 40,000 Israelis currently rely on medical cannabis to treat a wide variety of health issues ranging from cancer to epilepsy and endometriosis.

Israel’s Health Ministry has seen a spike in the number of growers applying for licenses since the beginning of the year. So far, nearly 400 have passed the first round of the licensing process, which includes police checks as well as land-ownership verification. Yet only eight farms have so far completed all the tests and received permits for cultivation. Yona Cymerman, COO of Can Innovation Finder, a firm that works with more than 30 Israeli canna-tech companies and some of the biggest licensed producers in Canada, believes the trend of high-profile figures from the security world joining the industry has both positive and potentially negative ramifications.

“On the one hand, it’s great because it gives tremendous credibility to the industry…. These (people) are globally recognized leaders in the military and political field with top-tier connections," Cymerman said.

Still, she added, “I don’t know how much they actually know about the cannabis industry… and how much professional expertise they bring to the market. The cultivators need security on-site for handling, distribution, warehousing, etc., but they must have that in place before receiving a license to distribute." Other industry leaders also highlight the important role such figures could play in propelling the medical marijuana industry forward in Israel from a business standpoint. “Most of these companies are raising money, and for this you need a good figure to open the door for you, and (one) who will be credible because it’s the cannabis industry,” Dr. Orna Dreazen, founder and chairperson of Nextage Cannabis Innovation, a development platform for pharmaceutical cannabis-based products, told The Media Line.

A biochemist in the pharmaceutical sector, Dreazen notes that industry leaders have tended to seek out former defense and security officials and believes it was essentially Ehud Barak, the former prime minister and defense minister – and one of Israel’s most decorated soldiers – who led the charge.

Ehud Barak, the former prime minister and defense minister also in the business medical cannabis (Photo: Amit Sha'al)
“It’s like a domino effect,” she explained. “If Barak can do it and he thinks it’s a serious industry, why not (others)?” Indeed, Barak was the one who enlisted Alon, the retired general, as CEO of Canndoc. Alon is a former chief of the Israel Defense Forces’ Central Command was once the IDF’s director for Iran-related issues.

“A day after (I retired), I received a phone call from Ehud Barak, who said there was some fascinating space (for me to join), and I decided to jump in,” Alon recounts.

“In some ways, (the cannabis industry) is a very different realm, but there are similarities,” he said, “The cannabis industry is an evolving market that is characterized by a very dynamic environment, which is not so far from the intelligence and military world that I have some 35 years of experience in.” In addition to these similarities, Alon notes that his experience in security and collaboration with the police sector are helpful in dealing with some of the issues faced by the cannabis industry. The business, he says, is “like a puzzle with 1,000 pieces, and security is only one of them. Cultivation and agriculture are very precise and have very strict, rigorous (standards).” The former general also mentioned his expertise in research and development, as well as his extensive network of connections in Israel’s booming hi-tech industry.

Indeed, aside from security and business opportunities, former defense officials could form crucial links between the medical marijuana sector and innovative technologies.

Lilac Mandeles, a chemist as well as founder and CEO of TechForCann, which seeks innovative technologies to incorporate into the cannabis industry, said she was not surprised that these senior figures were entering the cannabis fray. “Former defense officials are used to working with many defense technologies, cyber security and (are) very connected in many places around the world,” Mandeles, who also sits on the board of the government owned Netzer Hasharon (formerly Israel Military Industries) added. “They have the ability to step into businesses when there’s a high risk and not a lot of information… or certainty.” She believes that such people also have greater access to various technologies, including biotech and cyber, which could be of particular value. “The global interest in Israel is actually with the technology that they can bring to the industry,” she elaborated. “When you look at the medical cannabis industry, the technologies that are being used are not very high-end. The biotech and agritech areas are lacking new technologies.”

This assertion is something Danino confirms as being part of his long-term strategy.

“What I want to do in Together Pharma is not just grow (marijuana), because there will be growers all over the world,” Danino emphasized. “It’s to take the technology and the research and turn it into a biotechnological company that can lead the (world).”