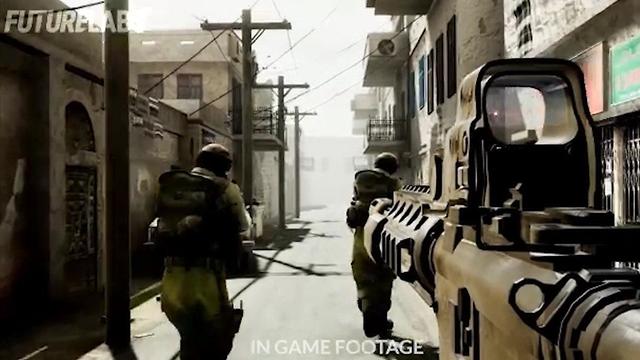 Future Lab corps is recruiting computer gamers to design the next generation of realistic combat environment simulators for IDF forces; testing in advanced stages; next up: a 'smart' combat vest

The Future Lab corps, a new unit in the IDF's Information Technology division, has developed an advanced virtual training environment that will revolutionize the world of simulators used by the ground forces. The simulator, which is currently in advanced stages of development and will be tested in combat units in the coming weeks, looks just like a computer game, but has special layers added to it to provide an unprecedented training experience.

Presently, simulators for combat units are essentially rooms with a large screen upon which the battle environment is projected and soldiers use guns with a laser attachment to shoot at targets on the screen.

Simulated urban combat
With the new simulators, soldiers wear virtual reality glasses with high resolution screens and use earphones with 3D sound. The need for the new simulators stems from the fact that an entire generation of soldiers and officers have little familiarity with actual heavy combat, since it has been some time since Israel has been involved in a conventional ground war.

Future Labs corps
During Operation Protective Edge (2014), the ground fighting was limited to only a few kilometers inside Gaza, and since 2006, 13 years ago, IDF forces have not entered Lebanon. Future Lab corps has developed advanced animation that realistically replicate a typical Lebanese street or the alleyways of the old city of Nablus — places IDF troops are likely to find themselves in. The system also includes sounds characteristic to the location on screen.

Simulated combat scene
The system also includes smart lighting that changes according to where the soldier is standing for a more realistic effect. While using the simulator, "players" wield rifles similar to those issued by the IDF and can maintain contact with the Air Force. It can also simulate Hamas and Hezbollah tunnels as the combat environment. The IDF intends to implement the system into basic training for new recruits, before incorporating it into routine battalion size training exercises.

A year ago, the IDF made a decision to incorporate advanced simulators into training and gamers, with a knowledge of computer science, were recruited into the new unit. "As gamers, we can take our passion for computer games to ignite the imagination in order to contribute to the IDF," said Sgt. Arel Herzog.

Gamers
The unit is now working together with personnel from special forces units on an electronic protection vest that combatants can wear in the battlefield. The new vest will be capable of "feeling" the environment and identify rain or grenade shrapnel in proximity to the wearer.