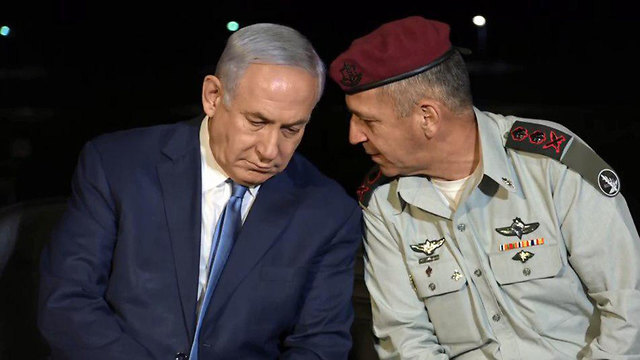 Elections, politics and the inevitable impact on the IDF

Analysis: The political stagnation of a new campaign season means delaying the massive U.S. military aid package, postponing the start of a new multi-year plan, and operating without non-military oversight; what it does not mean, however, is that the army cannot defend Israel's borders

The decision to hold new elections will inevitably lead to stagnation in the functioning of the government and the security cabinet, but will also have immediate ramifications for the IDF. It will impact troop reinforcement efforts, not to mention delaying long-term decisions for several months as the government grids to a halt.

The army has already begun preparations for a new multi-year plan, which was supposed to arrive on the table of the new cabinet in the summer or fall at the latest. The current multi-year plan, dubbed "Gideon," is expected to be completed in about a year's time, and brought stability to the IDF in recent years.

Benjamin Netanyahu and IDF Chief of Staff Aviv Kochavi (Photo: Aviahu Shapira)
The plan led to major changes and far-reaching reforms in the army, among them the closure of extraneous reserve units and old Air Force squadrons, cutting thousands of career soldiers, establishing new units and revolutionizing the technological and intelligence frameworks.

Above all, the plan led to greater training for ground troops, making them more cost efficient, and allowing them to prepare for the next war without any external fuss and with a regular budget that puts an end to annual battles with the Finance Ministry.

It is therefore doubtful whether this is what Lt. Gen. Aviv Kochavi had in mind when he planned to spend his first year as chief of staff busy making the army more deadly. The fact that the defense minister is also a prime minister who is fighting his own war of political and legal survival is hardly beneficial for healthy relations between army and government.

An example of these troubled ties was in evidence during the last election season, when Netanyahu was frequently photographed with soldiers as part of his political campaign, despite criticism and even a ban.

The delay in the implementation of the next multi-year plan also means delaying the massive aid package from the U.S. brokered with former president Barack Obama, which was supposed to begin this year. Furthermore, purchase contracts worth billions of shekels have not yet been signed due to the recent elections and Kochavi's appointment as IDF chief.

The army does have plans, but these cannot be implemented without a functional cabinet. The list of delayed decisions also includes the purchase of new Saar helicopters to replace 50-year-old choppers, defining a new Air Force fighter squadron, deciding on quantities of both heavy aerial munitions and new weapons manufactured by the United States for the Israeli army.

Two other significant decisions are expected to be placed in deep freeze: reducing the length of national service by another two months and appointing a new IDF ombudsman. Major General (res.) Yitzhak Brick, who proved last year just how crucial is the role of an independent gatekeeper for the army, has not been in post since January.

For the time being, the ombudsman's office is being run by a deputy, and this may continue for at least another year due to the new elections.

Nevertheless, the September 17 elections will not have a major effect on the military's operational routines along Israel's borders or secret IDF operations in the Middle East. It will also have no impact on the response to a war - if, heaven forbid, one breaks out in the south or the north.

This was clear in the winter of 2008-9, when Israel was embroiled in its first Gaza war while then-prime minister Ehud Olmert was dealing with the fallout of his criminal activity and in the midst of an election campaign.

And if Olmert can do it, surely Netanyahu, who has been overseeing the running of both country and army for years, can do it.

More on this topic from i24NEWS: