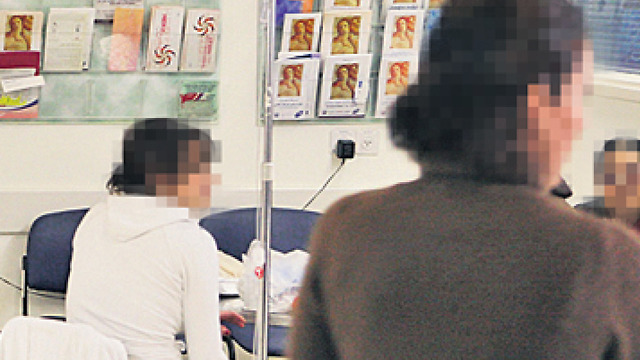 Israeli researcher among the leading researchers of international program that found Lynparaza (olaparib) effective in stalling the progression of disease for carriers of the BRCA mutation; 1 in 40 Jewish woman has the mutation

A drug treatment used for breast and ovarian cancer can help patients with advanced pancreatic cancer who carry BRCA gene mutations go nearly twice as long without their disease worsening than those who received a placebo, according to data from a late-stage clinical trial.

The results of the trial, which included Israeli researcher Dr. Talia Golan of Sheba Medical Center, were presented Sunday to the American Society for Clinical Oncology and published in the New England Journal of Medicine.

Cancer patients in Israel (Photo: Illustrative)
During the study, Lynparza (olaparib) was tested against a placebo as a maintenance therapy in 154 patients with metastatic pancreatic cancer whose tumors had not progressed after chemotherapy. Those who received the drug on average went 7.4 months before their disease began to worsen, a measure known as progression-free survival (PFS). That compared with a median PFS of 3.8 months for placebo, according to data presented. For the 6-7% of pancreatic cancer patients who carry these inherited 'mutations, the finding is significant. Golan called the findings "great news that we have hoped to receive for  'many years." She added: "Pancreatic cancer is one of the most durable and difficult to cure."

BRCA mutations are typically linked with breast and ovarian cancers but occur in other cancers as well. One in 40 Ashkenazi Jewish women carries this mutation.

Mutations in BRCA genes impair the ability to repair DNA damage, which can drive cancer growth. Lynparza and other drugs in the class known as PARP inhibitors keep cancer cells damaged by chemotherapy from repairing themselves. Lynparza became the first PARP drug to reach the market with a U.S. approval for ovarian cancer in late 2014.

An interim analysis, however, showed the drug made no significant difference in overall survival.

"We typically see about 10 to 12 months" for overall survival in these patients," said Dr. Eileen O'Reilly, a pancreatic cancer expert at Memorial Sloan Kettering Cancer Center in New York.

Patients in both arms of the Lynparza study lived about 18 to 19 months.

'"We are now talking about a medicine that actually may have the opportunity to improve outcomes for patients across a multitude of cancer types if they are harboring the BRCA mutation," said Dave Fredrickson, AstraZeneca's global head of oncology.