The site of the fire
Photo: Judea and Samaria district fire service 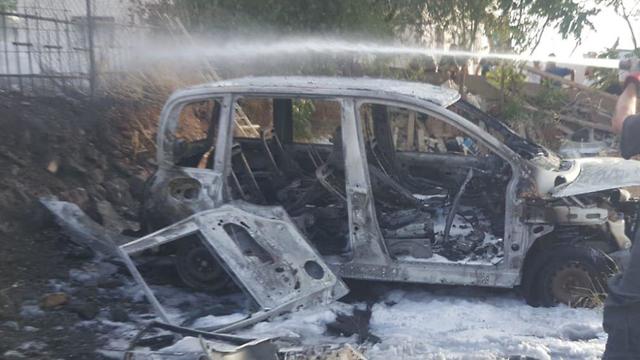 A four-year-old was pronounced dead by rescue personnel Tuesday evening after she was trapped in a burning car in the West Bank village of Haliliya, northwest of Jerusalem.

It appeared that the car was parked next to an abandoned building when it went up in flames. The body of the four-year-old was found inside the car when the fire was extinguished.

The aftermath of the deadly fire (Photo: Judea and Samaria district fire service)

Police investigators and forensics officials were at the scene as part of their investigation of the incident.

A paramedic from the Magen David Adom rescue service, Itzik Goldfarb, said that the girl had apparently been trapped inside the car.

"When we arrived at the scene, we saw the car burning and inside a girl who was apparently trapped. As soon as the firefighters had finished (extinguishing the blaze), we carried out a medical examination of the girl, who was aged about 4, who was suffering from burns," Goldfarb said.

"There were no signs of life, and there was nothing for us to do but pronounce her dead. We also treated family members who were in shock," he said.

Aaron Eichler, a paramedic from the Hatzalah rescue service, said: "When I arrived, I encountered a burning vehicle. The family told us that there was a girl inside the car who unfortunately was pronounced dead once the firefighters finished their work. Our emergency response unit offered assistance to the family members who saw the fire."

Earlier Tuesday evening, two large forest fires broke out near the communities of Even Sapir and Lifta close to Jerusalem. Six firefighting planes and 16 teams of firefighters were dispatched to the scene.

The police said that driving in the area difficult due to poor visibility caused by heavy smoke.

In Jerusalem, Menachem Begin Road was closed off in both directions from Golda Meir Boulevard to the entrance to the city until the fire was brought under control.