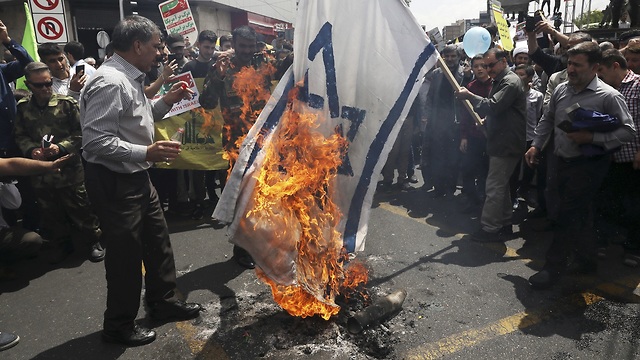 During a rare three-way meeting between Israeli, American and Russian national security advisers in Jerusalem later this month, the White House officials are expected to put forward a plan on how to deal with 'the primary irritant in the Middle East - the Islamic Republic'

The United States believes Russia may be more amenable than in the past to addressing U.S. and Israeli concerns about Iran’s influence, including in Syria, when national security leaders meet in Jerusalem this month, a U.S. official said on Tuesday.

The United States announced last week that John Bolton, White House national security adviser, would meet his Israeli and Russian counterparts in Jerusalem in June. But it provided no details about the meeting, which comes at a moment of heightened tension between Washington and Tehran.

The senior Trump administration official, who spoke to reporters on condition of anonymity, described the meeting as an “unprecedented diplomatic opportunity” for discussions on Syria - where all three countries have been involved militarily.

But beyond discussions to prevent any unintended military escalation, the U.S. official said the goal of the talks would be “to see how we can potentially work together to get rid of the primary irritant in the Middle East, which is the Islamic Republic of Iran.”

U.S. aspirations for Russian support in is effort to roll back Iranian influence are nothing new. Russia has long been publicly dismissive of such rhetoric, including on Syria, where Moscow and Tehran have both acted militarily on the side of Syrian President Bashar al-Assad in the country’s civil war.

The Trump administration last month sped the deployment of an aircraft carrier strike group and ordered bombers, Patriot missiles and more troops to the Middle East, citing intelligence about possible Iranian preparations to attack U.S. forces or interests. Iran has dismissed the accusations as groundless.

“We would hope to make the point in conjunction with the Israelis that we don’t see any positive role for the Iranians - and that would extend beyond Syria, to Lebanon, to Iraq, to Yemen - other places where they’re active,” the U.S. official said.

“And if the Russians recognize that fact, I think we will be very pleased with that outcome.”

Russian Foreign Minister Sergei Lavrov said last month during a visit by his Iranian counterpart to Moscow that U.S. calls to curb Iran’s influence in Syria and the broader Middle East were “unrealistic.” Asked what, then, gave the Trump administration optimism about the prospects now, the official said Russia’s public participation in a meeting of this kind in Israel - Iran’s arch-foe - was significant.

“The fact that the Russians see value in these conversations, that they’re willing to do it publicly, I think is in and of itself quite significant,” the official said. “And so we are hopeful that they’re coming to the meeting with some fresh proposals that will allow us to make progress.”

Beyond Bolton, Israeli national security adviser Meir Ben-Shabbat and Nikolai Patrushev, secretary of the Russian Security Council, are expected to take part in the meeting, according to the Trump administration.