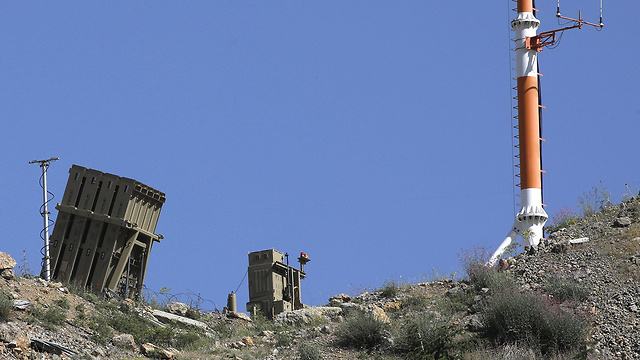 Iranian-backed terror group is attempting to build infrastructure for operations on Israel-Syria border, worrying Israelis who understand that while they are still in early stages, they pose a later threat

Two serious incidents on the on the Golan Heights put an end to any hope that the Israeli-Syrian border will be return to the calm of the pre-civil war days, now that Bashar Assad's army has cemented its control, with the help of Russian President Vladimir Putin.

The source of ground-to-air missiles fired at an Israeli Air Force jet in May or the identity of those behind the launching of two other missiles at Mount Hermon earlier this month are still unknown but the incidents illustrate the complex reality that Israel's military will have to face.

Hezbollah, an Iran-backed Lebanese militia, replaced rebel fighters pushed out of the Golan region by the Syrian military. They are the most serious threat to Israel with deployment on both the Lebanese and the Syrian frontiers.

The IDF is now completing the construction of an unprecedently broad intelligence-gathering apparatus, attached to the Dotan division on the Golan Heights.

Never has a division entrusted with protecting the border had access to that kind of intelligence force, concentrated in a secret location a short distance away.

On the other side of the border, Hezbollah's efforts, under the leadership of Ali Mussa Abbas Daqduq (codenamed Abu Hussein Sajed), are now focused on observing Israel from several observation posts and military locations, while also recruiting fighters from villages on the Syrian side of the Golan Heights.

Daqduq's efforts, conducted under the name "The Golan file,"  are in their early stages but still pose a worry for the Israelis. The militants have in their possession explosives, light arms, machine guns and anti-tank missiles.

Lt. Col L. from the IDF Spokesperson's Office, assures Ynet there is no permanent Iranian presence on the Golan Heights, but Hezbollah is trying to set itself up there.

At the secret Intelligence compound, screens show virtually every inch of the arena. Different branches of the military have representatives in the room.

When a convoy is spotted across the border, a drone is dispatched for a closer look.

Any clue is immediately analyzed, and field operatives stand ready to deploy as needed.