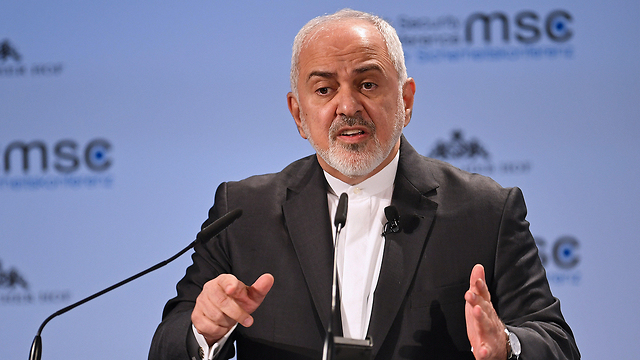 Iran's Foreign Minister blames Israel for pushing Washington to accuse Tehran of tanker attacks in tweet; Zarif: 'we know what happens when you believe their lies'

Iran's Foreign Minister Mohammad Javad Zarif gives a speech in Munich in February (Photo: Reuters)
"The B_Team's boy who cries wolf is crying once again: this time Mossad is fabricating intelligence about Iran's involvement in sabotage in Fujairah. I've warned of “accidents” and false flags—we know what happens when you believe their lies. We've been here before, haven't we?" Zarif tweeted.

On Tuesday, Israeli KAN public broadcaster reported that Mossad tipped off the United States about the sabotage on oil tankers in the Gulf, causing Washington to accuse Tehran of being behind the attacks.

Following the attack last month, the UAE said that four commercial vessels of various nationalities had been targeted by acts of sabotage, without naming who was behind the attacks.

Iran, for its part, called the attacks "alarming and regrettable" and urged a probe into the incident while warning of "adventurism" by foreign players to disrupt maritime security.

The sabotaged oil tankers off the coast of United Arab Emirates (Photo: AP)

According to a report by Channel 13 a week before the oil tanker attack, Mossad warned the US about a possible plot by Iran to attack US interests in the Gulf, causing Washington to send an aircraft carrier strike group and a bomber task force to the Middle East in a "clear and unmistakable" message to Iran.

Iran and the US have engaged in a war of words since then, threatening each other militarily while Iraq has attempted to ease tensions between the two.