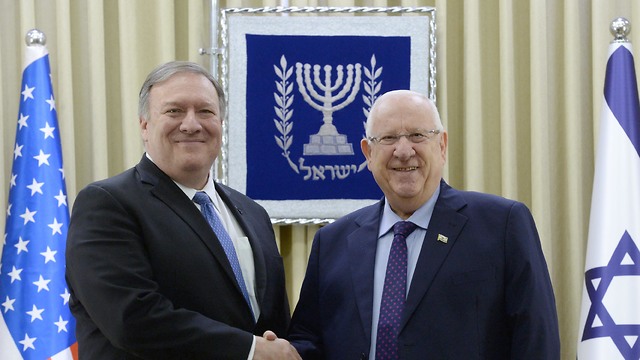 Pompeo: U.S. would 'push back' before Corbyn could implement anti-Jewish policies

Washington Post obtains recording of secretary of state telling NY Jewish leaders that if Labour did win British elections under Corbyn, White House 'won’t wait for him to do those things... It’s too risky'

U.S. Secretary of State Mike Pompeo told Jewish leaders that should Jeremy Corbyn be elected British prime minister, the White House would "push back" before the Labour leader could implement any anti-Semitic policies, the Washington Post reported Sunday.

According to a leaked recording handed to the newspaper, Pompeo was asked by Jewish leaders in New York that should Corbyn become premier, “would you be willing to work with us to take on actions if life becomes very difficult for Jews in the UK?”

In his response, Pompeo said that Corbyn should "run the gauntlet and get elected," the White House "won’t wait for him to do those things to begin to push back. We will do our level best. It’s too risky and too important and too hard once it’s already happened.”

Under Corbyn's leadership, the Labour Party has been repeatedly accused of failing to tackle anti-Semitism among its members, many of whom are fervent supporters of the former far-left backbencher elected as party leader in 2015.

Labour is currently facing calls to suspend newly elected Labour MP Lisa Forbes for liking a comment on social media that departing British leader Theresa May had a "Zionist Slave Masters agenda" and for saying she "enjoyed reading" posts claiming ISIS was created "by the CIA and Mossad."

Britain's Equalities and Human Rights Commission is also conducting an unprecedented investigation into Labour over claims of anti-Semitism in its ranks.

U.S. President Donald Trump last week declined a request from Corbyn to meet during the American leader's state visit to the UK, saying the Labour chief was "a negative force."

In March, Pompeo on Monday attacked Labour's record on anti-Semitism as a "national disgrace" in unusually strong criticism of the close ally's opposition.

Addressing the U.S. pro-Israel lobby AIPAC, Pompeo denounced a rise in anti-Semitism around Europe, the Middle East and in the United States but had especially strong words about Britain. "In Britain, the Labour Party's tolerance of anti-Semitism in its ranks is a national disgrace," Pompeo said.

Corbyn, a veteran leftist and supporter of pro-Palestinian causes, claims he is not anti-Semitic but has himself faced numerous calls of holding anti-Jewish positions.

In November 2018, he denied visiting the graves of terrorists behind the 1972 massacre of Israeli athletes at the Munch Oympics, but photos published by the Daily Mail showed him at a 2014 memorial service for the members of the Black September in Tunisia.

Nine members of the Labour party have recently quit, with many citing alleged anti-Jewish racism. One of them, Jewish MP Luciana Berger, said she received death threats amid a slew of abuse and concluded that the party had become institutionally anti-Semitic. Pompeo, a staunch defender of Israel, said it was legitimate in a democracy to criticize policies of Israel but not the very existence of the Jewish state.