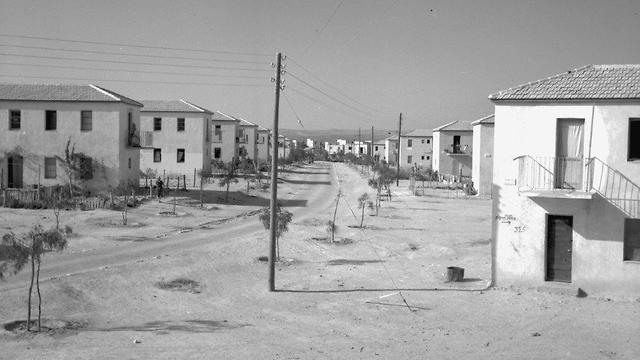 Negev Museum of Art is inaugurating an exhibition focusing on the early days of the founding of the capital of the Negev, hoping to enrich the collective memory of its residents through the ages

On Wednesday evening, the Negev Museum of Art will open an exhibition titled Those were the Times in Be'er Sheva, which will feature photographs, posters, films and documents from the 1950s and 1960s, focusing on the founding of the capital of the Negev.

The exhibition was created as an initiative of the Central Zionist Archive to celebrate the 100th anniversary of the World Zionist Organization in conjunction with the Steven Spielberg Jewish Film Archive, which is celebrating 50 years since its founding, curator Dr Dalia Manor said.

A new immigrant traipses through the sand dunes, circa 1950

The exhibition is meant to remind Be'er Sheva residents of places, institutions and events long forgotten.

The bulk of the exhibition includes photographs from the earliest years of the city's founding, showing the old city and the old town hall — now the Negev Museum of Art — and celebrations and ceremonies.

The exhibition is also designed to reflect the perceptions and agendas of the organizations that helped settle the Negev: Keren Kayemeth LeYisrael (JNF), Keren Hayesod and government bodies.

It aims to reveal how they chose to document events, including staged scenes, such as making the wilderness blossom, absorption of immigrants, education, ceremonies, visits by VIPs, donors and more.

Alongside the exhibition which will run until the end of August, a series of events are planned, featuring researchers and long-time residents of the city.

The first event is planned for Wednesday, June 19th at 6pm and includes a tour of the exhibit and of the earliest neighborhood established, led by Prof. Esther Meir and Dr. Ze'ev Zivan.

The entry fee for the event is NIS 40 and advance registration is required.

In addition to the historical exhibition, an art exhibition of artworks recently received by the museum will also be on display.

The museum's collection has continued to expand since the 1960s, thanks to gifts by artists and collectors.

Religious leaders observe Independence Day, Be'er Sheva, 1964
In the last year, the museum has received about 50 works by Israeli artists including paintings, drawings and sculptures, some of which will be on display.