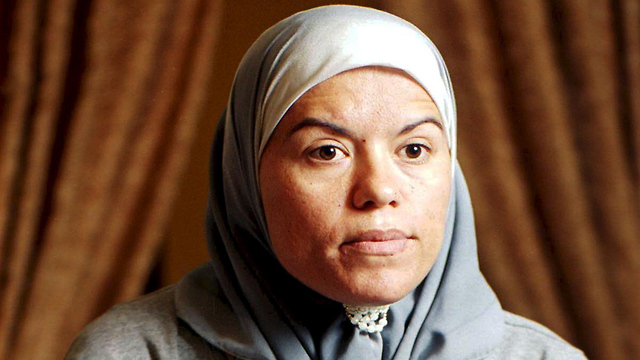 Despite her failing health the first lady, who died last week, continued her visits to inmates at Neve Tirza women's prison, supporting them through their rehabilitation efforts and providing them with hope

A letter to the First Lady, that was never received, opens with the words: "Dear Mrs. Nechama, I wish you a speedy recovery. I want to tell you I think you are a very special woman."

Long-term prisoner Dalal Da'ud, who corresponded with First Lady Nechama Rivlin (Photo: Alex Kolomoisky)
The letter was written by Dalal Da'ud, who has served 18 years of a 25-year sentence for murdering her abusive husband.

Mrs. Rivlin knew Dala from her visits to the Neve Tirza women's prison, where she observed a rehabilitation program and attended a number of performances by the prison theater group, both with the participation of Da'ud.

They two women met on other occasions as well, encounters that left a lasting impression on the prisoner.

"I was moved every time I saw you," Da'ud wrote on May 21 to the first lady, who was by then hospitalized in the days before her passing.

"I saw a modest and special woman who is full of joy and who is able to give hope to others. I am proud of you and wish you all the best the world has to offer as well as a speedy recovery.

"I've observed your desire to help women who have been victims of sexual or other violence. I have seen you help people as you kept up your visits to the prison despite your failing health."

Da'ud's case was brought in front of the president two years ago, for consideration for early release. He responded by ordering a parole hearing to discuss her early release, given that she had already served years of her sentence.

The hearing will take place in June. Sapir Sluzker-Amran of the Association of Civil Rights in Israel, who has been fighting for Dalal's release, says she had hoped Mrs. Rivlin would be able to attend her hearing.

When Rivlin's failing health became clear, Da'ud asked to send her the letter she had written, but the serious deterioration in the first lady's condition prevented it from being delivered.

Now Da'ud is mourning Nechama Rivlin, saying the prisoners were always so happy to see her - not because she was the wife of the president, but because she always engaged with them in a humane and sensitive manner.

Sara Friedman, Neve Tirza's head warden, adds: "Nechama spoke to the prisoners like a mother or grandmother would and not like the first lady. Her message was that although some of the inmates had done terrible things, they should still be rehabilitated and given hope.

"These women think there is no one on the outside who cares about them and here comes a lady of her stature and shows them there is light."

Orit Soliciano, Director-General of the Association of Rape Crisis Centers in Israel, says the letter meant for Mrs. Rivlin had moved her.

"Nechama was a noble and extraordinary woman with a sensibility to pain and suffering," she said. Dalal's words describe the first lady accurately, as a woman who observes those left behind by Israeli society, with compassion."

Siciliano called on the parole board to consider early release for Da'ud.

"I hope the board will see clear to enabling this woman to be truly free, for the first time in her life."