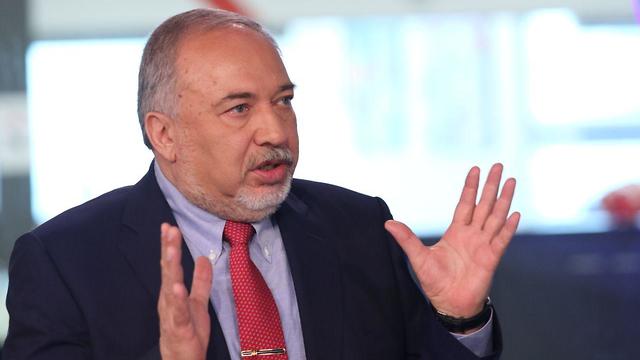 Yisrael Beytenu leader goes on the offensive, slamming Netanyahu for ‘surrendering’ to the Haredi parties and turning politics into personality cult; Liberman also said Blue and White can only form a coalition with ‘polar bears’

Yisrael Beytenu Chairman Avigdor Liberman on Tuesday attacked Prime Minister Benjamin Netanyahu for cosying up to the ultra-Orthodox parties who he said “say amen and wait for the checks to come.”

"Look only at the draft of an agreement between Likud and United Torah Judaism on a matter of separation of women and men," Yisrael Beytenu said in an interview with Ynet, referring to an agreement reported by the media but denied by the Likud officials.

The 61-year-old also said that for Netanyau forming a coalition with Haredi parties is “very convenient, because the ultra-Orthodox do not intervene on matters of security or foreign policy, they just say ‘amen’ and wait for the checks to come.”

Liberman once again reiterated that his desire to avoid a government influenced heavily by the ultra-Orthodox parties is what drove him to refuse to enter the Netanyahu coalition, which subsequently led to the Knesset being dispersed and another snap election being scheduled for September 17.

"We are going to elections because Netanyahu has surrendered to the ultra-Orthodox,” he said. “We played fairly, we didn’t talk behind anybody’s back … while Netanyahu negotiated with people within Yisrael Beytenu, with Blue and White people and with Avi Gabbay.”

"He (Netanyahu) makes it a personal issue. It’s no longer about the national camp, the right-wing, the left-wing … it is a personality cult of Netanyahu,” Liberman said, adding that he’s still committed to the right-wing coalition succeeding in the next election.

He also laughed off the prospect of Blue and White party putting together a government, suggesting they have a better chance of forming a coalition with “the polar bears.”

Liberman also dismissed the notion that forming partnerships with the Haredi parties is part and parcel of Israeli politics, a concept apparently adhered to by the Blue and White party, whose members were silent when it came to criticizing the ultra-Orthodox.

Nonetheless, Liberman said, Blue and White would not be able to coax the Haredim into a coalition headed by its party leader Benny Gantz.

"Anyone who has heard interviews with senior Blue and White officials understands their only chance to form a government is at the North Pole with the polar bears,” he said.

When asked whether he would recommend Netanyahu for prime minister if Likud wins the upcoming elections in September, Liberman said he feels “no obligation to crown Netanyahu … my commitment is to the right-wing … so we could form national government that’s liberal and not ultra-Orthodox.”