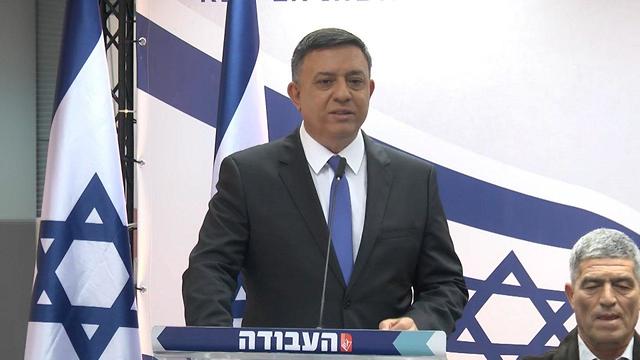 Under rule of former business exec, party that founded the country sunk to all-time low, winning just six seats in 120-strong Knesset; Gabbay to remain in secure no. 2 on party list

The leader of Israel's venerable Labor party, Avi Gabbay, announced Tuesday that he won't run in the upcoming primaries for party leader, set to take place ahead of the September 17 general elections.

But Gabbay said that he would not leave the party and instead would be claiming the no. 2 reserved spot on the labor list in the upcoming elections. The no. 2 spot was this week evacated by former IDF general and freshman MK Tal Russo, who said he would not be returning to politics in September.

Under Gabbay, the party that founded Israel sunk to an all-time low of just six seats out of the 120 in parliament after the April 9 elections.

"The direction was clear on the eve of the last election, but you don't make big decisions during a storm, so I waited for things to be relevant in order to decide and make an announcement," the Haaretz daily quoted Gabbay as saying Tuesday.

He added that, "there were mistakes for which I take full responsiblity," which he said were made "out of full conviction in our path and our commitment to win."

Avi Gabbay reacts to the poor results for Labor in the APril 2019 elections (Photo: AFP)

A former business executive with working class beginnings, Gabbay shocked Labor's staid establishment by winning the party leadership in 2017 on a promise of drawing centrist, traditional voters who had migrated into Prime Minister Benjamin Netanyahu's orbit.

But after an initial surge, he found himself enmeshed in internal conflicts before crashing in the polls.

Gabbay caused a political storm in January when he announced without warning that he was dissolving the Zionist Union faction, a partnership between Labor and former foreign minister Tzipi Livni's Hatnuah party.

Livni, who was sitting beside Gabbay and unaware of what was coming, announced her departure from politics shortly afterwards.

Former party leader and defense minister Amir Peretz and former social activist Stav Shaffir are among those vying to replace him.