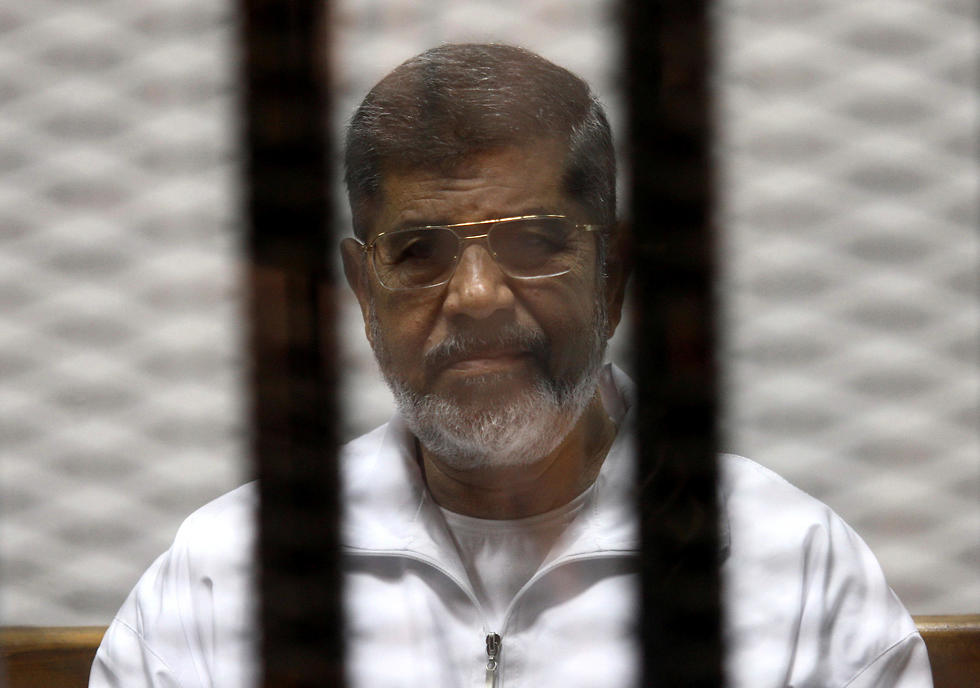 Analysis: Egypt and other countries will continue their crackdown on the radical organization, but younger members might not be willing to stand for this much longer and fight facing as it faces perhaps the most serious challenge to its existence

The question now is whether his death will breathe new life into an organization that since Morsi’s ouster in 2013 after a turbulent and divisive year in office, can only be described as being on life-support.

Mohamed Morsi in a cage during a court appearance in Cairo, May 2014 (Photo: Reuters)
Officially, the Egyptian government said the 67-year-old’s death was due to a cardiac arrest. Yet Freedom and Justice, the political arm of his Muslim Brotherhood movement, blamed the government, saying in a statement on its Facebook page that prison conditions led to what amounted to an “assassination.” Morsi was Egypt’s first civilian leader, voted into the presidency in 2012, a little more than a year after the ouster of Hosni Mubarak during the so-called Arab Spring. Many saw in this the fruits of a long, carefully planned struggle for the group. “The Muslim Brotherhood was around for years and it worked relentlessly to reach the presidency and to rule,” says Hamdi Murad, a Jordanian expert on Islamic groups.

The Brotherhood enjoyed wide success and resurgence during the Arab Spring in many places around the Middle East.

A pro-Morsi demonstration in Tunisia in 2013 (Photo: Reuters)

Its victories in parliamentary and presidential elections ushered in a new, yet short-lived era. It showed its competency in staying relevant and its ability to reemerge and reorganize as needed.

Robert Riggs, an associate professor of religion and politics at the University of Bridgeport in Connecticut, tells The Media Line that it was crucial for the group to win an election and rule in Egypt.

“It was symbolically important to see the country where the Muslim Brotherhood originated give them a democratic opportunity to rule,” Riggs says.

The group was founded in Egypt in 1928 by Hassan al-Banna. It currently has a number of active branches around the world, perhaps most notably in Tunisia, Qatar, Kuwait and Turkey.

“The Muslim Brotherhood as a movement served as the inspiration and model for many other Islamist political and social movements across the wider Islamic world in places like Pakistan, Indonesia, Turkey and other places,” Riggs says.

“In those countries, similar organizations took root and thrived based upon the model of social and political reform that was developed by the Muslim Brotherhood in the early 20th century.”

A Muslim Brotherhood rally in Nazareth in 2013 (Photo: Alarab )
He contends that rising to power boosted the Brotherhood’s popularity and gave hope to many of its loyalists. But then came Morsi’s ouster. “In Egypt, the Muslim brotherhood has been outlawed as an organization, something not done since the time of Gamal Abdul Nasser in the 1960s,” he says, although offshoots still exist in places like Jordan, Syria, Morocco, Israel and the Palestinian territories. Today, the Muslim Brotherhood is facing perhaps the most serious challenge to its existence. Morsi’s failures during his short-lived stint as president were a huge setback for an organization used to a tumultuous history. They provided the necessary fodder for the Egyptian military to engineer a coup headed by then-defense minister Abdel Fattah el-Sisi, who is now president. Hasan Awwad, an expert on Islamic groups, says that Morsi’s death is certainly a “setback” for the Brotherhood although the group will rebound. “The Muslim Brotherhood is highly organized,” Awwad says. “What we saw from them was just the first of several classes of leaders. They have depth.” A massive crackdown ensued after the coup and the government arrested thousands of its leaders, while many others fled the country. “The aim was to destroy the Muslim Brotherhood’s structure and make it impossible for the Islamist group to reorganize,” he says.

Egyptian President Abdel Fattah el-Sisi (Photo: EPA)
According to Murad, the steps taken by Sisi were part of a plan to systematically “dismantle” the organization forever. “He (Sisi) wants to make sure that the Brotherhood is brought to submission and is done with for good,” Murad says. “He wants to crush them.”

After Morsi was forced from office, Egypt saw a rise in bombings and violent attacks against its security forces.

A bloody military campaign pitted Cairo against Bedouins and fighters in the restive northern part of the Sinai Peninsula who had declared their loyalty to Islamic State.

Since its founding, the Muslim Brotherhood faced numerous waves of repression at the hands of Egyptian governments, which since 1952 have been dominated by military rule. Its top leaders were either assassinated or were arrested, sentenced to death and executed. Ali Darwish, a British expert on Islamic groups, says that despite the huge outpouring of sympathy following Morsi’s death, “the situation is under control” and it is “unlikely we will witness an increase in violence in Egypt because of it.” Yet Darwish asserts that if the Egyptian government’s harsh policies against the group don’t end soon, it could lead to instability. “The government must find a way to end its arrest campaign and crackdown on dissent,” he says.

Turkish supporters mourn late Egyptian president Mohamed Morsi
Maher Farghali, an Egyptian journalist and researcher on Islamic movements, disagrees, saying that the Brotherhood is a “ruthless” organization that will do anything to stay relevant, adding that it will “capitalize” on Morsi’s death. “The comments and statements of the Muslim Brotherhood and its arms will show the benefits it will derive from the man,” Farghali says. “They exploited him alive and (now) dead.” As part of Cairo’s efforts to demonize the group, Egyptian authorities and official media outlets regularly call the Brotherhood a “terrorist group.” Though Morsi joined relatively late in life and was not considered a great leader, “his death will be symbolically important” and could drive radical elements of the group to take up arms against the authorities, Murad says.

The Muslim Brotherhood has been outlawed in many other Arab countries as well, including Saudi Arabia and the United Arab Emirates, and its activities have been greatly reduced in places like Jordan.

According to the University of Bridgeport’s Riggs, authoritarian regimes fear groups like the Muslim Brotherhood for what they have to offer.

“These countries are authoritarian political systems in which the rulers hold a deep level of suspicion toward political Islamic movements despite self-identification as Muslim countries and Muslim leaders,” he says.

“The Muslim Brotherhood and organizations similar to it thrive on providing an alternative source for goods and services that populations need, but they also provide a venue for sharing ideas (and) community organizing, and a basis for the establishment of a certain type of civil society that can threaten the monopoly on power and ideas that are held by the leaders of these countries,” he says.

“Essentially, political Islamic movements challenge the hegemony of the state and make it more difficult for rulers to enact (laws) without first gaining consensus and buy-in from their populations.”

A Muslim Brotherhood rally in Egypt (Photo: AFP)
According to Awwad, Arab governments should not ignore the Brotherhood. “The group is part of the political fabric in the Middle East and it can’t be eradicated,” he tells The Media Line. “If you do that, you risk more violence and an end to democracy.” But there are other threats facing the Muslim Brotherhood. “There is an internal fight between the old guard and the new guard,” Awwad says, something that shows how weak and fragmented the group is in many places. “This divide among the group’s members may present it with two major challenges, one external and another internal,” he says. “The organization is being fought aggressively (from without)…. But the fight internally is just as serious for the group because it could lead to its breakup.” Members of the younger generation are looking for a new way forward in an attempt to assert their leadership. “Some of the young rank and file members, especially those living outside Egypt, are advocating a more aggressive approach,” he says. “What happened and is still happening in Egypt with the Muslim Brotherhood may force some of its members to force the organization to revert to its old ways.” Murad says that many are demanding a return to jihad, or the “struggle” phase that once took place between the Muslim Brotherhood and Arab governments.

“The young members may become radicalized,” he says, “and come to feel that the group’s non-violent ways aren’t getting it the respect it deserves.”