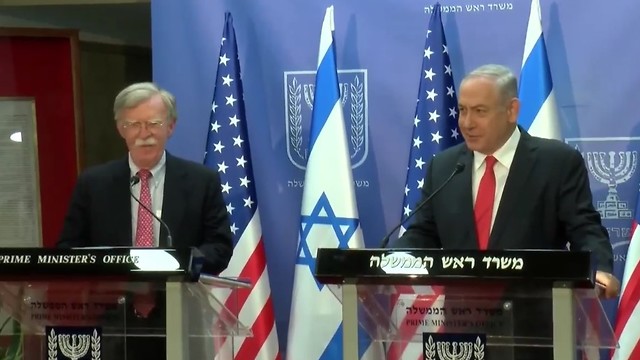 U.S. National Security Advisor in Israel to meet with Russian and Israeli counterparts for what was initially planned as tripartite summit on Syria but likely to now focus on Iran.

Iran is running a campaign of aggression but is now under enormous economic pressure due to U.S. President Donald Trump's sanctions, Prime Minister Benjamin Netanyahu said Sunday as he met with U.S. National Security Advisor John Bolton in Jerusalem.

Bolton is in Israel for what was planned as a tripartite summit on the future of Syria, but now seems likely to be dominated by American-Iranian tensions. The Tuesday summit will include Bolton and his Russian and Israeli counterparts.

Bolton branded Iran as a nation that is not seeking peace, and warned that it should not mistake American "prudence" for weakness. Iran, he said, could never be allowed to obtain nuclear weapons.

Tensions between the United States and Iran ramped up last week over the downing of an American drone which Washington says was in international airspace but Tehran claims was intercepted in its skies.

Trump said Friday that a retaliatory strike had been planned on Iran but was aborted after he learned 150 people would be killed.

Bolton reiterated Sunday, however, that although the president stopped the strike on Thruesday, it could go ahead at any point in the futures, something which Trump said over the weekend.