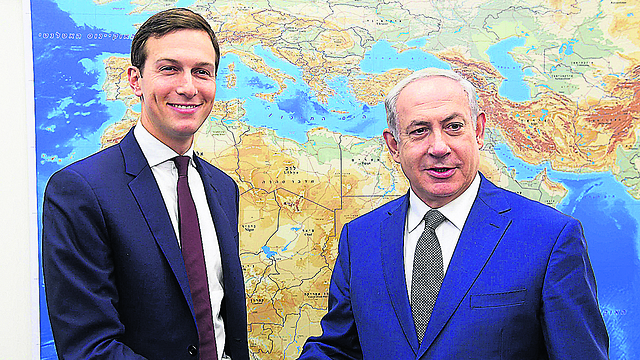 Israel's problem with the deal of the century

Analysis: The Palestinian Authority was quick to reject Trump's peace plan, and they won't like the American ideas in Jerusalem either; Washington suggests linking Gaza to the West Bank – a move that Israel torpedoed for several years, and they fear that large investment in Aqaba tourism will hurt Eilat

The first part of U.S. President Donald Trump's self-proclaimed deal of a century for Middle East peace, released Saturday by the American government, has upset the Palestinians who argue that the plan only seeks to buy off their national aspirations with money.

But the Israeli side also sees no lesser problems in Trump's proposal.

Linking Gaza and the West Bank, as the Americans suggest in the plan, is making the Israeli leadership see red. For years, the Israeli government made sure to cut off the Palestinian population in Gaza from the West Bank, and rejected any attempts to connect the two areas via tunnels, bridges, trains, or secured roads.

Yet the organizers of the Bahrain workshop did not invite Israel's Coordinator of Government Activities (COGAT), Gen. Kamil Abu Rokon, the military official in charge of civilian administration in the territories, who would be essential to giving momentum to any link construction.

Some of the U.S. proposal not only requires agreement from Israel but also arrangements from Abu Rokon himself as the person in charge.

Even the invitation of Abu Rokon's predecessor as COGAT, Maj. Gen. (res.) Yoav "Poly" Mordechai cannot replace the participation of the current coordinator.

Other clauses in the policy proposal require Israeli legislation and regulation, but nothing can happen without cooperation from the Palestinian Authority.

At the same time, the plan does not mention any incentives for the Israeli public to win its support. It's possible that such incentives will appear in the political part of the plan, but, unlike its neighbors, Israel will not see benefits from the economic plan.

Further, tourist development of the beach resort of Aqaba in Jordan, which is mentioned in the plan, could come at the expense of Israel's own adjacent resort of Eilat.

"Strangely, Lebanon is suddenly in the draft proposal, alongside Jordan and Egypt, as a target for investment and projects. It's possible that this brought Lebanon to the negotiating table with Israel regarding the sea border, but that could have resulted from Saudi pressure," he said.

"In any case, (Lebanon's connection) to the Palestinian issue doesn't make sense, and Lebanon of course won't participate in the Bahrain summit."

"The plan promotes Palestinian dependence on the Israeli economy in many ways, and against Israeli interests.

"It includes sensitive issues like registering ownership over land – good luck with that in a government filled with (right wing pro-settler politicians) Betzalel Smotrich and organizations like that of Ze'ev Hever."