The sun sets over the Small Crater
Photo: Eli Segal 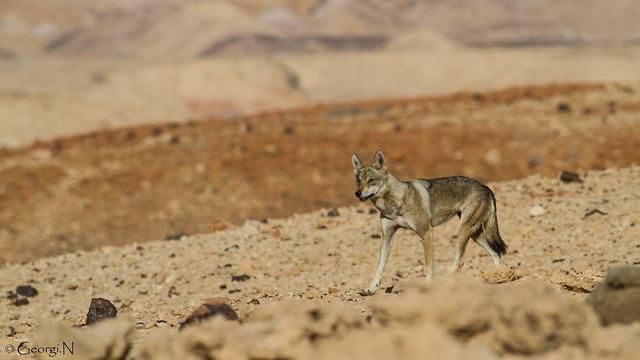 Ecological treaure in heart of the desert finally gains recognition as a nature reserve, joining its bigger 'brothers' the Ramon Crater and Big Crater; site is home to rare birds, mountain goats and even jackals

Happy news for nature lovers and travelers: The Negev Desert's Small Crater (HaMakhtesh HaKatan), the third in size of the five craters in the area, has been declared a nature reserve.

The Small Crater serves as a special ecological purpose to plants and wildlife such as mountain goats, jackals, and eagles on the verge of extinction.

A jackal in the Small Crater (Photo: Israel Nature and Parks Authority)

While the Big Crater (HaMakhtesh HaGadol) and Ramon Crater (Makhtesh Ramon) have already been declared as nature reserves, the process to bestow the same honor on the Small Crater as a nature reserve has been a bit more complex, since some of the reserve grounds is part of Israel's Nuclear Research Center.

The Israel Nature and Parks Authority held long negotiations with the nuclear research facility and in the last year even took them on tour of the area in order to help them understand the unique nature of the site.

"During the tour, seven eagles just appeared and started flying above our heads. That was the deal breaker," says Israel Nature and Parks Authority official Gilad Gabai. "They also came to an understanding of how powerful an impact this place has and how important it is," he said.

Wildlife in the Small Crater (Photo: Israel Nature and Parks Authority)
Ironically, the fact that part of the crater is in the vicinity of the nuclear center makes it a safe spot for many animals, including the eagles, since it's a closed area and aircraft aren't allowed to fly over it and disturb their nesting. The declaration of this 61 million meters squared as a nature reserve was signed by the Finance Minister Moshe Kahlon.

The crater, also known as Hatzra Crater, is the eastern-most crater in the craters that formed in the Negev Highlands, along with Ramon Crater, the Big Crater and two craters on Mount Arif. It has an almost circular shape, a length of 8 kilometers (at its longest side), a width of approximately kilometers, and a depth of 400 meters.

It is also an important nesting location for eagles and other birds of prey that are on the brink of extinction, and serves as a route for mountain goats in the area to move from the center of the Negev to the Judean Desert further north.

Shaul Goldstein, CEO of the Israel Nature and Parks Authority said: "The State of Israel has been blessed by nature and its unique heritage and values. Together along with the public and government bodies, we have a duty to continue to work for the creation of national parks and reserves to keep these values for us and future generations."