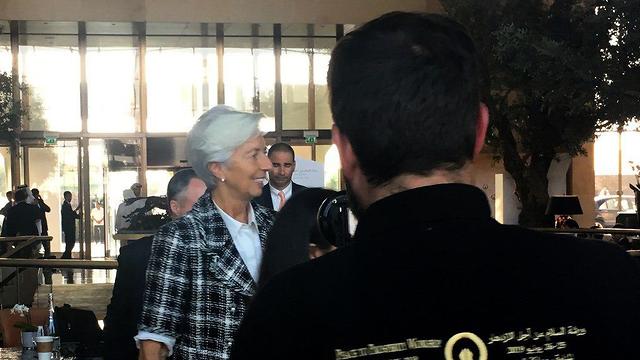 Jared Kushner, chief architect of U.S. policy on Mideast, seeks to persuade Palestinians to accept $50 billion support plan as Gazans and West Bank residents jam the streets, shouting 'We are hungry for dignity, we don't need the money'

Growth in the West Bank and Gaza has to be focused on creating jobs, the head of the International Monetary Fund said on Wednesday, as she discussed the U.S. administration's $50 billion economic plan for Israeli-Palestinian peace. "One of the really good aspects of the plan ... is that it identifies some of the sectors, some of the industrial and economic sectors, that will be conducive to jobs," said IMF managing director Christine Lagarde.

Christine Lagarde at the conference in Bahrain, June 25, 2019

"It cannot be any kind of growth in the West Bank and Gaza, it needs to be job intensive," she added, citing agriculture, tourism and construction as sectors that "will absorb a lot of labor."

The IMF expects the Palestinian economy to contract by 1.6% this year and says unemployment stands at 30% in the West Bank and 50% in Gaza.

"There is an economic plan, there is urgency: it is a question of making sure that the momentum is sustained," Lagarde said.

The IMF has been operating in the West Bank and Gaza since 1995, providing loans, credit guarantees, and policy advice to the Western-backed Palestinian Authority.

President Donald Trump’s son-in-law and senior adviser, Jared Kushner, appealed Tuesday for the Palestinians to consider the U.S. plan, even though they already rejected the proposal because it does not include a political resolution to the long-running conflict.

Speaking in Bahrain, Kushner defended the proposal as the foundation of any eventual peace plan. Meanwhile, Palestinians protested the plan in the streets of the West Bank, Gaza and elsewhere.

Jared Kushner speaks at the opening of the Bahrain workshop, June 25, 2019 (Photo: Reuters)
“We don’t need money. We are not hungry for bread,” said Gaza physician Said Jadba, one of the protesters jamming the streets of West Bank cities as the plan was unveiled. “We are hungry for dignity.” The president’s son-in-law sought to defend his long-anticipated plan at the start of the two-day workshop aimed at building support for a program to combine private investment and support from regional governments to transform economically devastated Palestinian communities. “My direct message to the Palestinians is that despite what those who have let you down in the past have told you, President Trump and America has not given up on you,” Kushner said. “This workshop is for you, and if this is executed correctly, it will lead to a better future for the Palestinian people: a future of dignity, prosperity and opportunity.” Kushner’s audience in the tiny Gulf kingdom did not include any official Palestinian delegation. Israel, which will have to sign off on many of the proposal’s projects, was not invited to send any government officials, either. Those who heard Kushner in person were Arab finance ministers, the heads of international financial organizations and global business executives and investors. While the representation was broad, many countries’ delegations were not headed by Cabinet ministers, an indication of their uncertainty about the proposal’s viability. The Palestinians have rejected the proposal — which aims in 10 years to create a million new jobs, slash unemployment and improve living standards in the West Bank, Gaza and across the Middle East — because it does not include a horizon for ending Israel’s occupation and granting independence. U.S. officials say the political portion of the plan addressing such thorny issues may not be released until fall.

Protests against the Bahrain summit in Gaza (Photo: Reuters)
Kushner acknowledged that a political solution is key to the success of the economic proposal. He said it was more important to first set out what is economically possible. “Agreeing on an economic pathway forward is a necessary precondition to resolving what has been a previously unsolvable political situation,” he said. Trump boiled it down to even simpler terms: “We have to get economic support because the Palestinians don’t have money, and we have to help the Palestinians with some money,” he told reporters at the White House. But, without proposals on borders, the status of Jerusalem and the fate of Palestinian refugees, the Palestinians say the economic plan is meaningless. To express their rejection, Palestinians in Gaza called a general strike on Tuesday to protest the meeting, with demonstrators in the West Bank burning effigies of Trump and featuring a donkey pasted over with images of Gulf royals. “Palestine is not for sale!” protesters chanted. “From Bahrain to Saudi Arabia, we are not tempted by your millions!” Besides opposition from the intended beneficiaries of the proposal, the plan has been harshly criticized by former diplomats, aid workers and others involved in past peacemaking efforts for being unrealistic and lacking any clear description of who will pay for it. Trump, Kushner and U.S. Treasury Secretary Steven Mnuchin argue that a new approach is needed precisely because previous efforts have fallen short. They note that the heads of the International Monetary Fund and the World Bank will attend and speak at the event, as will the head of FIFA, the international soccer federation, and the managers of numerous large investment funds.

Attendees at the economic workshop in Bahrain, June 25, 2019 (Photo: Reuters)
The Palestinians wrote to FIFA chief Gianni Infantino on Tuesday urging him to reconsider his participation. “How can the president of the highest governing body of football, and the most outspoken person on the importance of separating politics from sports, agree to participate in a political workshop whose objective is to determine the future of Palestine in the absence of Palestinians?” the letter said. Enthusiasm has also been tempered by the Trump administration’s refusal to endorse the creation of a Palestinian state in the West Bank, Gaza and East Jerusalem, the two-state solution that has long been viewed internationally as the only viable path to lasting peace.

The Palestinians cut ties with the White House after Trump recognized contested Jerusalem as Israel’s capital in December 2017 and say they will not accept a peace proposal from an administration they see as biased toward Israel.

Trump’s Mideast team has recently signaled it will accept Israeli annexation of parts of the West Bank, the heartland of any Palestinian state, deepening Palestinian suspicions.

Even the Arab delegations attending the meeting in Bahrain have couched their participation with reaffirmations of support for an eventual Palestinian state.

Protests against the Bahrain summit in Gaza (Photo: Reuters)
Saudi Arabia, one of the few Arab countries to send its foreign minister to the event, said it remained committed to that end with a state based on the border that existed before the 1967 Six-Day War. Egypt and Jordan, the only Arab nations to have signed peace deals with Israel, are sending only mid-level representatives to Bahrain and said they would not abandon demands for a Palestinian state. At a ceremony hosted by Israel’s president to mark 40 years of Egyptian-Israeli peace on Tuesday, Egyptian Ambassador to Israel Khaled Azmi said his country’s “vision was, and still is, based on full nation-statehood and security for everyone in the region.” “The goal we aim to achieve through negotiations between the two parties is one that is based on justice, legitimate rights and mutual willingness to co-exist in two neighboring independent states living in peace and security,” he said. Bahrain, which has close ties to the Saudis, has been criticized for hosting the conference and sharply limited the number of journalists allowed to cover it. It has defended its decision by saying its only objective is to support the “brotherly Palestinian people.” Although Bahrain has cracked down on dissent, Bahraini opposition voices protested the meeting on social media, particularly on Twitter, where Arabic hashtags about the workshop were trending under banners “Down with Bahrain conference” and “Down with the Deal of Shame.”