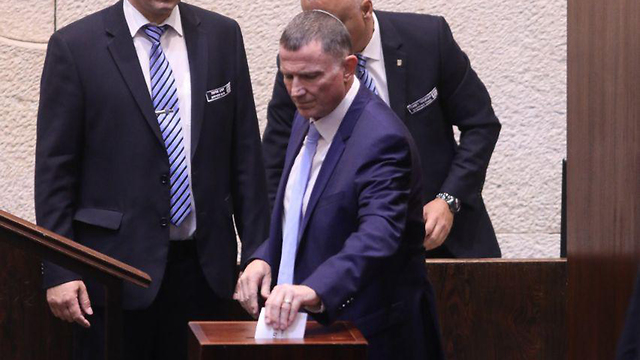 Can Netanyahu spin himself out of another election?

Analysis: While there's no apparent majority to a possible bill to cancel the September elections, Knesset Speaker Yuli Edelstein thinks the Blue and White party should sleep on it; and who knows, perhaps the PM who has already proven that there are no limits when it comes to his political survival, has an offer they cannot refuse

Knesset Speaker Yuli Edelstein has a sense of humor. When I asked him if Benjamin Netanyahu was in favor of the initiative to cancel the September elections his reply was pithy and succinct. "For some reason, he's not against it," Edelstein said, and I could hear him smiling on the other end of the line. It seems someone other than Netanyahu has an interest in getting these elections canceled.

Edelstein votes in a Knesset meeting (Photo: Knesset Spokesperson)
Indeed, it wasn't too long before sources from the prime minister's inner circle confirmed he is "seriously looking into Edelstein's proposal."

But alas, even if Netanyahu's top priority is to push for this initiative, it doesn't make it plausible. On the contrary. For whenever Netanyahu comes up with a new political idea, several parties are quick to realize that whatever it is, it must be bad for them.

And as expected, Blue and White quickly dismissed the plan as spin meant to exonerate Netanyahu from the blame of dragging the nation to the second round of elections in a year.

Party officials told me that they are still willing to share a unity government with Likud, so long as it is headed by anyone but Netanyahu. Get us Gideon Sa'ar or Yuli Edelstein and we're on board as early as tomorrow morning, they said.

Yisrael Beytenu leader Avigdor Liberman was also quick to declare that Netanyahu isn't guided by Israel's best interests, but rather by the fear of seeing his reign come to an end.

It's difficult to imagine Liberman backing this bid to cancel the elections, given that he himself was behind the beef that brought us to this point in the first place. It was a well-played move, judging by Liberman's subsequent polling performance.

Add in opposition from Labor and Meretz and there is no majority for a bill to cancel the elections, which needs the approval of 80 MKs. The problem is that many fine and talented people are working to make the cancelation initiative a reality. According to Edelstein, if he can recruit broad enough support, he'll approach the Knesset Presidium and ask to have the summer recess canceled. When the Knesset resumes its work, it will be able to vote on canceling the elections, and then, all the madness we've been witnessing since April will disappear, like magic. There's no doubt that Edelstein recognizes the public's feeling that another round of elections is complete insanity. What he fails to recognize, or fails to admit he recognizes, is Netanyahu's continuous attempts to avoid facing justice, and his dragging the public after his every whim.

Prime Minister Benjamin Netanyahu (Photo: Olivia Pitusi)
After calling for elections, failing to establish a coalition and then calling for another round of elections, the prime minister supports — or even initiates — the canceling of elections voted for by 74 MKs. When I asked Edelstein how he now intends to persuade 80 MKs to vote for the cancelation, he refused to accept my naysaying. But getting a majority for this bill is the least of Edelstein's problems. Legally speaking, both the attorney general and the Knesset's legal advisor think that the elections cannot be canceled. But what does the attorney general have to do with it, says Edelstein. This is a matter for the Knesset, and polls show that the majority of the public want a unity government, not another round of elections. Edelstein mentions the vast expense that fresh elections will incur, and the complete halt in governmental work it's causing. It's nice of him to remember this now. Where was he when Netanyahu insisted on dismantling the Knesset instead of handing the prime ministry to another MK, so that they could form a government? The chances of the cancelation actually happening are slim, both legally and politically. But who knows? Netanyahu has already proved that when it comes to his political survival, he has no limits. And if Blue and White are bored by being in opposition, they might end up receiving an offer they cannot refuse from the prime minister. Time will tell, Edelstein told me smugly. Let Blue and White sleep on it. All we can do is wait.