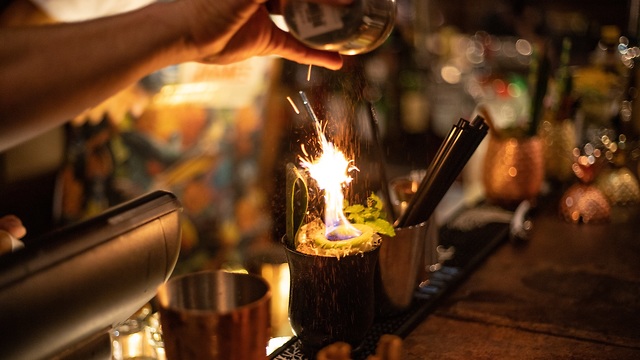 Beating the heat with cocktails

Even with Tel Aviv Cocktail Week behind us, the summer cocktail season kicks off in style as restaurants unveil their latest cocktail menus and two mixology contests showcase local talent

The premise of TLVCW was simple: participants purchase a one-time digital pass online for NIS 50; this entitles the bearer to purchase signature cocktails at each and every participating bar for the special price of NIS 25. Each bar guarantees at least one of its cocktails will be available at the discounted price -- and there is no limit to the number of these cocktails that can be purchased.

The TLVCW (a.k.a., DrinkTLV) pass also entitled the bearer to join in a number of free events during the week, including bar hopping and mixology workshops. In addition, there was a contest -- open to the general public -- for creating the best new cocktail.

To facilitate and promote bar hopping by neighborhood, TLVCW printed a special map pinpointing clusters of participating bars. Finally, there was one pop-up bar that operated for Cocktail Week only: The Swizzle Lounge, on the rooftop of the Brown TLV Urban Hotel, was serving eight unusual tiki cocktails (made with St. James rum), alongside a menu of three tapas.

Even restaurants not connected with TLVCW are encouraging their clientele to chill with cool cocktails during the hot summer months. The Moses hamburger chain released its list of seven summer cocktails, for an initial launch price of NIS 29 each. The Tel Aviv Hilton Hotel announced 11 creative new cocktails, each reflecting a different region of the country.

Cafe Albert, a popular Ramat Aviv brasserie, is promoting its own list of five specialty cocktails, ranging from savory to sweet to bitter. The Bloody Cherry, for example, is a sunny interpretation of the classic Bloody Mary, featuring yellow cherry tomatoes in place of the traditional red.

The Pink Meadow highlights strawberries and powdered sugar, while the Bitter Love enhances a base of white sangria, and the Bleeding Cosmo is another reinvention of a classic.

Finally, Cafe Albert celebrates the Mediterranean with the Saloniki, based on that famous Greek spirit, ouzo.

While at Cafe Albert, it is definitely worth enjoying a meal. We have previously recommended their pasta; and in addition to the specific dishes mentioned there, I can now add the delicious Cheese Treats Ravioli (the literal Hebrew is “cheese candy ravioli”) -- rectangular pillows of pasta filled with a mixture of three cheeses in a sauce of yellow cherry tomatoes with arugula oil and walnuts.

Finally, since Cafe Albert is also a patisserie, the desserts -- especially the cheesecake, profiteroles and apple strudel -- are outstanding.

Israel is sending bartender Gurami Sepiashvili of the Zalame Akbar cocktail bar in Be'er Sheva to represent the country in the World Class annual international mixology competition, to be held in Glasgow, Scotland, in September.

Sepiashvili was chosen after the final mixology competition held this week at the T-House Bar in Tel Aviv.

Sepiashvili beat out four other finalists to win this year’s event, with his winning original cocktail “The Train That Never Stops” -- featuring two creative homemade syrups and hummus water. The five finalists, who had been whittled down from a starting field of more than 100 competing bartenders, were pitted against each other in four challenging final categories.

The runners up in this year’s contest were: Noam Sharet, of Haiku Skybar; Orel Levy, of Guest Room; Tiny, of Jasper Johns; and Daniel Harel, of Sahki Sahki. Sepiashvili will have to compete in the global competition against bartenders representing more than 50 countries.