The oil tanker seized by the UK in Gibraltar
Photo: AP 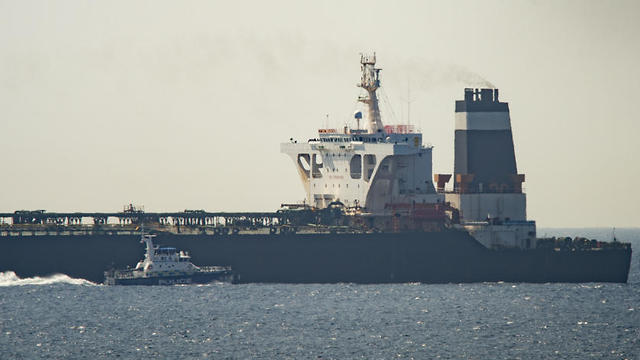 Grace 1 apparently set sail from Iran, according to mapping data, and could also have defied American ban on Iranian exports, despite papers claiming cargo from Iraq

In a dramatic step that could escalate tensions with Iran, British Royal Marines seized an oil tanker in Gibraltar on Thursday accused of violating EU sanctions by transporting oil to Syria.

The Grace 1 tanker was impounded in the British territory at the mouth of the Mediterranean Sea, after sailing around Africa from the Gulf. Shipping data reviewed by Reuters suggests it had been loaded with Iranian oil off the coast of Iran, although its documents say the oil is from neighboring Iraq.

Grace 1 oil tanker seized by the UK in Gibraltar (Photo: AP)
The Gibraltar authorities who seized it did so under the authority of European sanctions against Syria that have been in place for years, with no reference to the source of the oil. But the likelihood that the cargo was Iranian draws a link between this incident and a new U.S. effort to halt all global sales of Iranian crude, in what Tehran has described as an illegal "economic war" against it. European countries have tried to stay neutral in that confrontation, which saw the United States call off air strikes against Iran just minutes before impact last month, and Tehran amass stocks of enriched uranium banned under a nuclear deal. In a statement, the Gibraltar government said it had reasonable grounds to believe that the Grace 1 was carrying its shipment of crude oil to the Banyas refinery in Syria. "That refinery is the property of an entity that is subject to European Union sanctions against Syria," Gibraltar Chief Minister Fabian Picardo said. "With my consent, our port and law enforcement agencies sought the assistance of the Royal Marines in carrying out this operation."

'So public, so aggressive'

The incident appears to be the first in which European authorities have seized a tanker for allegedly violating Syria sanctions, which have been in place since 2011.

"This is the first time that the EU has done something so public and so aggressive. I imagine it was also coordinated in some manner with the U.S., given that NATO member forces have been involved," said Matthew Oresman, a partner with law firm Pillsbury Winthrop Shaw Pittman who advises firms on sanctions. "This is likely to have been meant as a signal to Syria and Iran - as well as the U.S. - that Europe takes sanctions enforcement seriously and that the EU can also respond to Iranian brinkmanship related to ongoing nuclear negotiations." Iran has long been supplying its allies in Syria with oil despite such sanctions. What is new now is U.S. sanctions on Iran itself. They were imposed last year when President Donald Trump pulled out of an agreement that guaranteed Tehran access to world trade in return for curbs on its nuclear program. Those sanctions have been tightened sharply since May, effectively forcing Iran off of mainstream crude markets, making it desperate for alternative ways to sell oil and more reliant on its own tanker fleet to store supplies it cannot sell.

The U.S.-Iranian confrontation has escalated in recent weeks, taking on a military dimension after Washington accused Tehran of attacking tankers in the Gulf and Iran shot down a U.S. drone. Trump ordered air strikes but called them off at the last minute, later saying too many people would have died.

European countries opposed Trump's decision to exit the nuclear deal last year, and they have promised to help Iran find alternative ways to export. But they have so far failed to ease the impact of U.S. sanctions, with all major companies halting plans to invest.

Iran has said it wants to keep the nuclear deal alive but cannot do so indefinitely unless it receives some of the promised economic benefits. In the past week, it announced that it had accumulated more low-enriched uranium than allowed under the deal, and it says it will refine uranium to a greater purity than the deal allows from July 7. By restricting Iran's ability to move oil around the globe, the U.S. sanctions have choked off Tehran's Syrian allies. Government-controlled areas of Syria suffered acute fuel shortages earlier this year resulting from what Assad described as an economic siege. In May, Syria received its first foreign oil supplies for six months with the arrival of two shipments including one from Iran, a source familiar with the shipment said at the time. Earlier this year, Reuters revealed that the Grace 1 supertanker was one of four tankers involved in shipping Iranian fuel oil to Singapore and China, in violation of U.S. sanctions.

Ship mapping information from data firm Refinitiv shows that in the latest case, the Grace 1 sailed a long route to the mouth of the Mediterranean around the southern tip of Africa instead of via Egypt's Suez Canal.

The 300,000-ton, Panamanian-flagged tanker is managed by Singapore-based IShips Management Pte Ltd. It was documented as loading fuel oil in the Iraqi port of Basra in December, though Basra did not list it as being in port and its tracking system was switched off. The tanker then reappeared on tracking maps near Iran's port of Bandar Assalyeh, fully loaded. A maritime intelligence source said the ship may have made the long journey around Africa to avoid having to transit the Suez canal, where such a large super-tanker would have had to unload its oil and refill after passing through, potentially exposing its cargo to seizure by Egyptian authorities. "We welcome this firm action to enforce EU sanctions against the Syrian regime and commend those Gibraltar authorities involved in successfully carrying out this morning's operation," a spokesman for British Prime Minister Theresa May said. "This sends a clear message that violation of the sanctions is unacceptable." Iranian crude exports were around 300,000 barrels per day or less in late June, industry sources said, a fraction of the more than 2.5 million bpd Iran shipped in April 2018, the month before Trump withdrew from the nuclear deal.