Barak and Netanyahu in 2012
Photo: AP 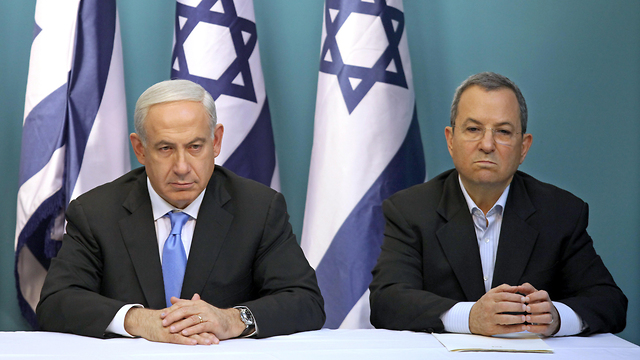 Netanyahu and Barak are telling stories and making promises

As the September elections near, Ehud Barak tells us that he is the only one able to beat Netanyahu. Netanyahu, on the other hand, tells us he is the only one who can lead the Likud Party to victory. Never mind the facts. Indeed, in 1999, when Israel voted for prime minister when direct elections were used, Barak beat Netanyahu big time with 56 to 44 percent support. In the Knesset elections his Labor Party won 26 seats and Netanyahu's Likud only 19 seats.

Barak and Netanyahu in 2012 (Photo: EPA)
Back then, ultra-Orthodox Shas was the new power to be reckoned with. But Barak's government lasted less than two years and ended in chaos. In the next direct elections — which were just as flawed for Israeli reality as the previous ones were — Ariel Sharon beat Barak big time, with 62 percent to 37.5 percent. Just like Barak is no magician who can beat Netanyahu in every round, Netanyahu isn't one either. During the last five election rounds, Netanyahu won two, lost two and got a tie in one. Netanyahu lost to Ehud Olmert's Kadima in March 2006. His Likud Party only won 12 seats, while Kadima won 29, and Amir Peretz's Labor won 19 easts. He then lost to Kadima, headed by Tzipi Livni in the 2009 elections: 28 seats to Kadima and 27 to Likud. Barak's Labor got 13 seats. The same guy from the big win of 1999.

אהוד ברק בראיון לאולפן (Photo: Avi Mualem)
But he did win in 2013, with 31 seats for the Likud, 19 to Yair Lapid's Yesh Atid and 15 to Shelly Yehimovitz's Labor. He also led the Likud to a win in 2015 with 30 seats while Isaac Herzog's Zionist Union got 24. Netanyahu didn't beat Benny Gants and his Blue and White Party this April. His Likud won 35 seats and Blue and White won 35 seats, a perfect tie. We can go on and on. How about 1996, when the Netanyahu-led Union of Right-Wing Parties, then complied of Likud, Gesher and Tzomet, only won 32 seats while the Labor that ran alone, headed by Shimon Peres, got 34 seats? But Peres didn't lead the new government, since he lost on the very first direct elections Israel has known, by a single percent.

Shimon Peres, Ehud Olmert, Benjamin Netanyahu and Ehud Barak in 2006 (Photo: GPO)
Since then, we've had nine rounds of elections. Bark won one, in 1999. Netanyahu won two, in 2013 and 2015. All the rest were won by other politicians who led the right and center-left blocks. In all nine election campaigns, Netanyahu's Likud won an average of 28 seats, less than a quarter of the Knesset seats. But he was able to put together a coalitions whenever he didn't have the lead. The man seems to be a master of putting together coalitions, not of winning majority of votes. Beating him then, doesn't take a magician.